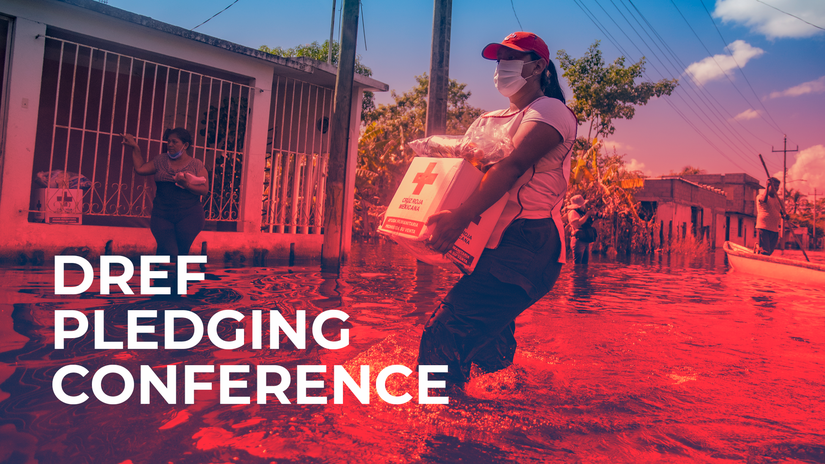 Laura, a volunteer with the Mexican Red Cross, wades through flood water in Tabasco in November 2020 to urgently provide relief items to affected communities also contending with the COVID-19 pandemic.

Leading donors from around the world united on 18 October to pledge new or renewed funding to the IFRC's Disaster Relief Emergency Fund (DREF). It's the quickest, most efficient and most transparent way of getting global funding directly to local humanitarian actors, both before and immediately after a crisis hits.

Climate-related disasters are occurring with increasing frequency and intensity around the world. But most go unseen—devastating lives, infrastructure and economies without attention, resources or help.

Local and rapid response is what's needed the most. But often the Red Cross or Red Crescent in disaster-hit countries lacks the resources or capacity to respond, especially if they are tackling multiple crises.

That's where the DREF makes all the difference. It’s a central pot of money through which the IFRC channels global funds rapidly and directly to our National Societies for early action and immediate disaster response.

To address the massive humanitarian impacts of climate-related disasters and COVID-19, investment must come at the community level where it has the greatest impact. The DREF brings aid straight into the hands of people in need and builds the capacity of Red Cross and Red Crescent Societies who are best placed to deliver it.

Since launching in 1985, the IFRC has supported 200 million people in crisis worldwide through the DREF.

The DREF Pledging Conference, held on 18 October and co-chaired by the IFRC and the European Union, sought to grow this life-saving and innovative fund to CHF 100 million per year as of 2022, and up to CHF 300 million by 2025, to address the alarming rise in disasters and to support millions more people.

The European Union continues to support the Disaster Relief Emergency Fund. It is a concrete example of our commitment to localization. Through this fund, our resources have been channelled to populations with the most pressing needs, in an open and direct manner.

The IFRC is grateful to the following partners who pledged new, or renewed, funding to the DREF during the conference:

We also would like to thank the respective National Societies from the above countries for their support to the DREF and for their continued engagement with their governments.

Watch: meet some of the people around the world who we've supported through the DREF

For more information about the DREF or the pledging conference: