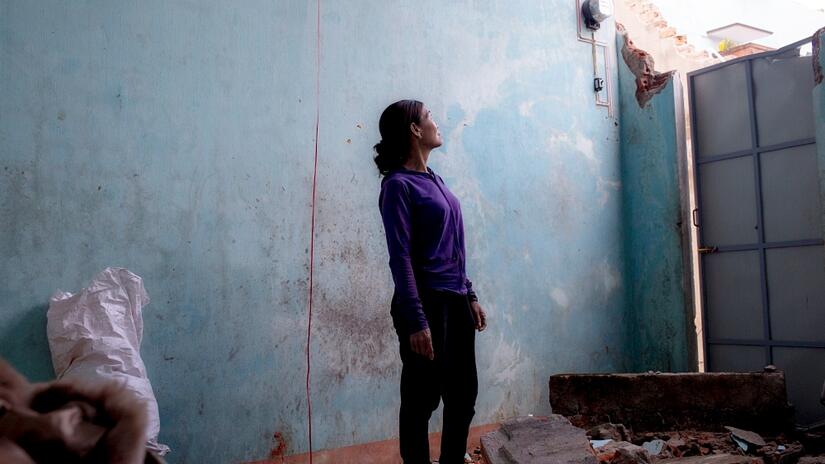 To Thi Hong, 57, stands in the ruins of her house destroyed by a typhoon in Trung Hoa village, Viet Nam. More than 2000 houses in districts are either completely or partially unroofed and destroyed by the recent Typhoon Molave that made a landfall in Vietnam on October 28, 2020.

Since the beginning of October, multiple storms and a major typhoon have hit central Vietnam, causing severe flooding and landslides across nine provinces. These storms and floods are among the most devastating and deadliest in recent decades. Over 150 people have been claimed in the floods and landslides and hundreds of thousands of homes have been damaged or destroyed.

"I watched with horror as the tin roof of my home was blown away by the storm,” says To Thi Cam, 51, from the ruins of her house in Trung Hoa village in the wake of Typhoon Molave. "All I wish for right now is a place where I can sleep and cook." More than 2000 houses in Hiep Duc district were either completely or partially destroyed.

Multiple emergency shelters were set up for people who had to flee their homes in the face of the storm.  Dinh Thi Thanh, 33, rests with her child in a temporary shelter. Thanh lost her other son and relatives to a landslide that also destroyed her home of more than a decade.

Viet Nam Cross volunteers have been deployed to devastated communities to begin work rebuilding houses severely damaged by the storms.

More than 400,000 homes need to be rebuilt or require major repairs.

Nguyen Ngoc Giao, a Viet Nam Red Cross volunteer, works to fix a roof to a damaged home ahead of the next storm. More storms are predicted in the coming weeks.

On top of lost livelihoods, thousands of hectares of crops have been destroyed and valuable livestock has been lost.  Red Cross and United Nations assess the damages made by Typhoon Molave, in Phu Truong village.

Elsewhere in Hiep Duc district, a mother and her 13-year-old son take a break from clearing away debris in what is left of their ruined home in An Phu village.