A landslide or landslip is the mass movement of rock, debris, earth or mud down a slope. While most landslides are caused by gravity, they can also be caused by rainfall, earthquakes, volcanic eruptions, groundwater pressure, erosion, destabilization of slopes as a result of deforestation, cultivation and construction, and snow or glacial melt. Debris flows, or mudflows, are fast-moving landslides that are especially dangerous due to their speed and volume. Some debris flows have been recorded as reaching speeds of over 160 kilometres per hour. 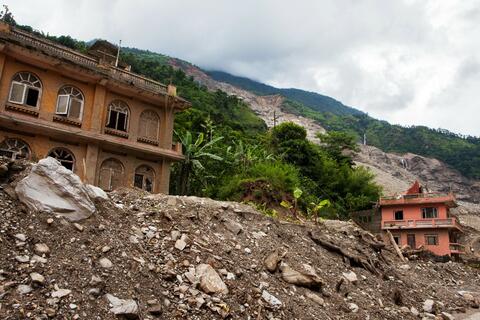 Do you know how to prepare for a landslide?

Learn and be alert to early warning signs in the natural and built environment around you. Have landslides happened before? Can you see bulging ground at the base of slopes, are trees becoming more and more tilted and are you noticing an increase in water flow or muddy water? Stay informed about the weather and learn about, and participate in, early warning systems in your area.

Seek expert advice before any construction to avoid building in landslide prone areas and to understand how to minimize their potential impacts. Avoid building on steep slopes, close to mountain edges and at the mouth of steep ravines. Protect your property by planting ground cover on slopes and building retaining walls. And work together with your neighbours or community to build channels that direct flow around buildings.

Be alert to unusual sights and sounds such as faint rumbling or shifting ground. Board up windows and doors and place sandbags to divert water flow. When a landslide happens, or is about to happen, get out of its path as quickly as possible, informing neighbours and local officials if you suspect imminent danger. If evacuation is not possible, find your closest shelter and protect yourself by curling up tight into a ball and protecting your head.

Look for warning signs in your natural and built environment

If driving in a landslide, avoid flooding streams and river valleys

Evacuate if possible, do not stay in the path of a landslide

Check for injured and trapped people without entering the slide area

Key hazard-specific messages for individuals and communities on how to prepare for, and stay safe during, landslides.