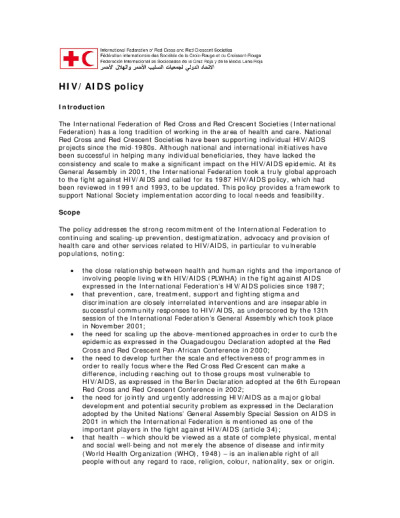 The International Federation of Red Cross and Red Crescent Societies (IFRC) has a long tradition of working in the area of health and care. National Red Cross and Red Crescent Societies have been supporting individual HIV/AIDS projects since the mid-1980s. Although national and international initiatives have been successful in helping many people, they have lacked the consistency and scale to make a significant impact on the HIV/AIDS epidemic. At its General Assembly in 2001, the IFRC took a truly global approach to the fight against HIV/AIDS and called for its 1987 HIV/AIDS policy, which had been reviewed in 1991 and 1993, to be updated. This policy provides a framework to support National Society implementation according to local needs and feasibility.