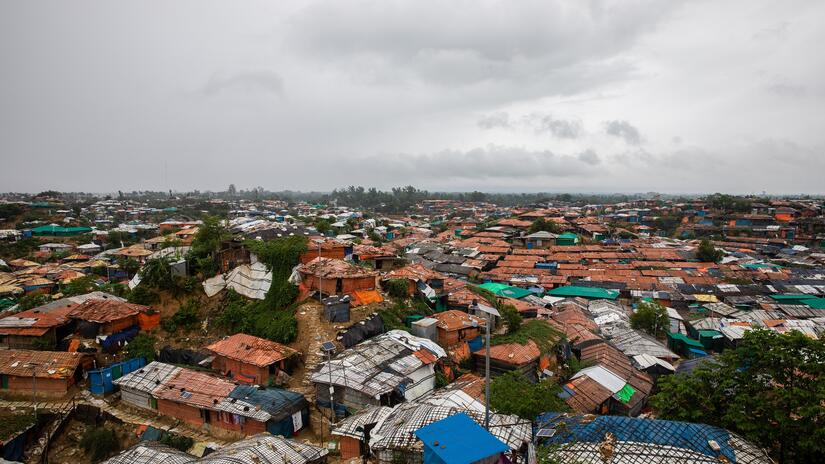 Cox’s Bazar / Kuala Lumpur, 19 August 2019 – Tens of thousands of people who fled violence in Rakhine to camps in Cox’s Bazar, Bangladesh are living their lives in cramped tents and shelters, in conditions that fall well below international standards.

Two years on from the exodus triggered by violence on 25 August 2017, over 700,000 people live in crowded camps with little space between their small shelters. The average space per person in the camps is 24 square metres but falls to less than 10 square metres in the most densely populated parts of the camps. Minimum standards set by humanitarian organizations call for at least 30 square metres per person.

“Space has been a challenge since the beginning of this response. In the emergency phase, our focus was on meeting basic needs and ensuring everyone had a roof over their heads. Now, we must move together to improve basic conditions at the camps, particularly for larger households. As this has become a protracted crisis, we are focusing on longer term planning”

The Red Crescent, supported by the International Federation of Red Cross and Red Crescent Societies (IFRC) and other partners, is building new shelters that will meet the basic standards for space. They also provide greater protection against the heavy winds common in Cox’s Bazar during the cyclone season, helping to keep families safer.

These new shelters are being constructed now. Families will be able to move voluntarily, freeing up space in other parts of the camp.

Many houses and shelters in nearby host communities are similarly poor. The Red Crescent is supporting 245 families from host communities to build new durable homes that will protect them from risk during the monsoon and cyclone seasons. Many more are receiving advice and guidance on how to safely and securely repair damage to their homes. Overall, the Red Crescent will assist 60,000 people in host communities.

Bangladesh Red Crescent also continues to provide people in the camps with food and relief items, water, sanitation and hygiene promotion, along with other important services including health care and psychosocial support. Bangladesh Red Crescent delivers this assistance through its health facilities, community safe spaces, outreach programmes, and hundreds of volunteers from both Bangladesh and Myanmar.

Despite the efforts of the Red Crescent and other partners, meeting basic needs remains a challenge for all aid groups in Cox’s Bazar. Sanjeev Kumar Kafley, head of IFRC’s sub-office in Cox’s Bazar said:

“Until long-term solutions that address the causes of this crisis are found, hundreds of thousands of people will continue to live precariously in an area that is worryingly exposed to the elements.”

Over the past two years, Bangladesh Red Crescent and its partners have reached over 260,000 people with emergency help including food, water and shelter. More than 268,000 medical consultations have been delivered through 11 health facilities. Some 60 million litres of safe drinking water have been distributed.

IFRC is the world’s largest humanitarian network, comprising 191 National Red Cross and Red Crescent Societies working to save lives and promote dignity around the world.