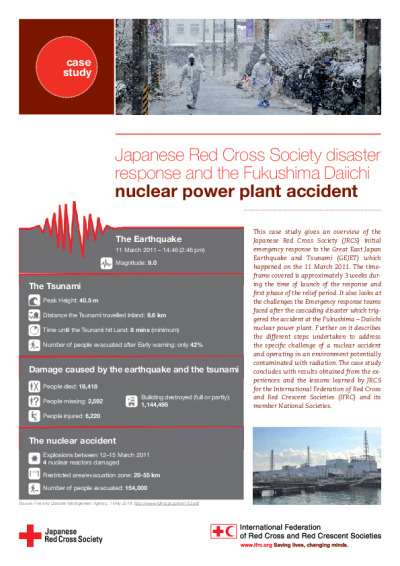 This case study gives an overview of the Japanese Red Cross Society (JRCS) initial emergency response to the Great East Japan Earthquake and Tsunami (GEJET) which happened on 11 March 2011. The timeframe covered is approximately 3 weeks during the time of launch of the response and first phase of the relief period. It also looks at the challenges the Emergency response teams faced after the cascading disaster which triggered the accident at the Fukushima – Daiichi nuclear power plant. Further on it describes the different steps undertaken to address the specific challenge of a nuclear accident and operating in an environment potentially contaminated with radiation. The case study concludes with results obtained from the experiences and the lessons learned by JRCS for the International Federation of Red Cross and Red Crescent Societies (IFRC) and its member National Societies.