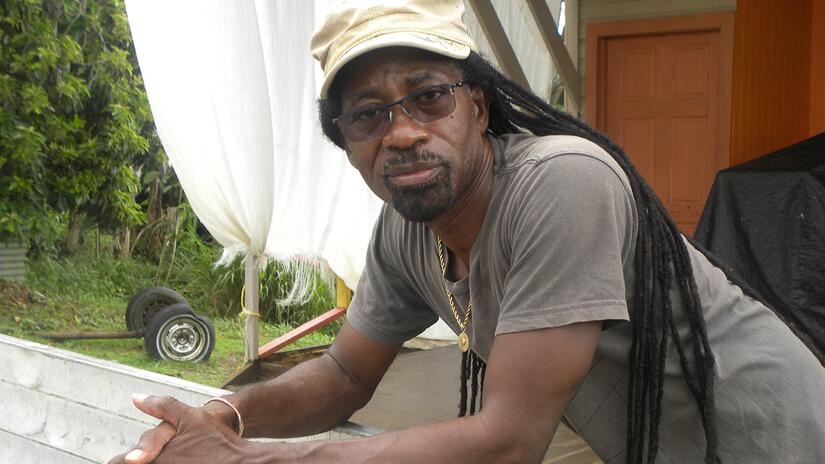 “You doh ever want to become the latest victim of Zika, Guillain Barre Syndrome, dengue or chikungunya, so cover up, take some time and do some clean up.” Catchy, melodic and accompanied by the sweet sounds of steelpan it sounds like the beginnings of an interesting calypso but a conversation with the singer reveals that it is much more than that. It is a jingle, it is a plea to the listener, most importantly it is a lesson to be heeded. Ajamu is a name with African/Nigerian origins that means ‘a man that fights for what he wants’, therefore it should come as no surprise that Edson Mitchell, better known as Ajamu, fought for his life. The nine-time Calypso King of Grenada was one of the persons infected with the Zika Virus who subsequently developed Guillain Barre Syndrome.

According to The Mayo Clinic, “Guillain-Barre (gee-YAH-buh-RAY) syndrome is a rare disorder in which your body's immune system attacks your nerves. Weakness and tingling in your extremities are usually the first symptoms. These sensations can quickly spread, eventually paralyzing your whole body.”

The Mayo Clinic further states that “the exact cause of Guillain-Barre syndrome is unknown. But it is often preceded by an infectious illness. There's no known cure. Most people recover from Guillain-Barre syndrome, though some may experience lingering effects from it, such as weakness, numbness or fatigue.”

August 16th, 2017 is a date Ajamu will never forget as it was when he fell ill but to tell the truth he had been feeling unwell long before that. Plagued daily by extraordinary headaches since March or April, he simply took medication and thought little of it. Scheduled to perform in Toronto in mid-August he booked a flight to Canada. The day of the flight he woke early, as most travellers do, but paid no mind to the strange sensation in his hands. It was a sign of things to come, however, as he found himself in the airport in his home slippers, an unusual mistake that should have indicated that something was wrong, but he just laughed off the wardrobe fail.

It was during the flight when he experienced what he described as” the worst headache of my life” that he made the decision to see a doctor. By that time it was too late, when the plane landed he had to be hospitalised as his legs would no longer support his body. This first hospitalisation was followed by two more stints as he was released despite having really high blood pressure. It was his wife Lucy who came to Toronto and took him back to their home in Virginia, even though it was deemed risky for him to fly. After two days and a battery of tests Ajamu finally had his diagnosis. It was Guillain Barre Syndrome. This was a disease about which he had never heard so it was his daughter, a Nurse, who did some research and educated him.

Almost two years later he still gets emotional while talking about it because there was one particularly difficult night where he essentially gave up. He is of the firm belief that he would not be here today if not for the grace of God and the support of his ‘biggest blessing’, Lucy.

Ajamu has regained his mobility fully however he is experiencing the lingering effects. He is easily fatigued and his is memory and eyesight never really returned to their previous states. He also notes his smile is not the same. The good news is that his greatest fear did not come to pass and he has the use of his hands as all his fine motor skills have returned. In fact his band members say that he is a better musician now than he was before. It may sound strange to some but for this sound engineer and self-taught musician, life in a wheelchair would have been preferable to life without the ability to play music. He professed, “I don’t know what my life would be if I wasn’t able to play music again”. Even though he is now back on his beloved instruments he isn’t 100% recovered as he expected to be by now. Cold temperatures affect him so he has to take this into consideration now when scheduling his performances.

Acceding to a request to sing a jingle for the Grenada Red Cross to help in the fight against the Aedes Egypti mosquito was no hardship for him, as, making music is what he does. That he would take it a step further and shoot a video to raise awareness, (his suggestion) about the required behaviour change is somewhat surprising. “My greatest love is for God and humanity. God is humanity,” is the rationale he proffers. If one were to look at humanity through a Red Cross lens his motivation aligns perfectly with the first fundamental principle. That he would not wish his experience on his worst enemy and would do anything to prevent it from happening to anybody else reflects a desire to prevent and alleviate human suffering as well as protect life and health.

Ajamu’s perspective on his experience is one that harkens back to a saying by his grandmother that goes, ‘better to light a candle than cuss the darkness.’ Instead of bemoaning the cards he was dealt he chooses to spread a message. He believes it is his responsibility to educate people, that this is his purpose, the reason that he is still here. The Caribbean Public Health Agency (CARPHA) predicts that the Caribbean will see a return of dengue, which is also spread by the Aedes Egypti mosquito, in the near future and Erin Law, Global Zika Advisor, explains that these diseases, Zika, dengue and chikungunya, are “expected to be cyclical, that it is expected that there will be an outbreak again”, therefore we must be prepared. Ajamu hopes that if people can learn one thing from his experience it would be to not to take anything for granted because life is very fragile. He would encourage Grenadians and persons from the Caribbean to minimise opportunities for the mosquito to breed even though “mosquitos and humans have to co-exist”, he says with a smile.