Myanmar: IFRC calls for greater protection of health workers and warns of a deepening humanitarian crisis 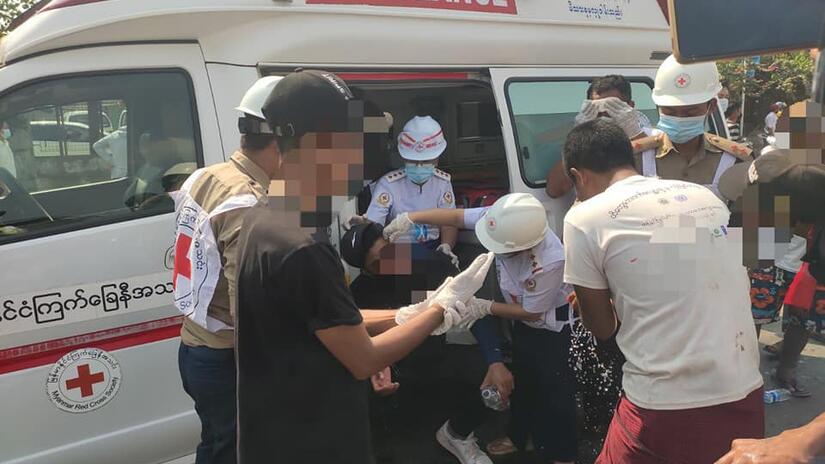 Kuala Lumpur/Yangon/Geneva,1 April 2021 - Two months following the military takeover in Myanmar, the International Federation of Red Cross and Red Crescent Societies (IFRC) is deeply concerned about the escalating violence and mounting casualties amongst the civilian population and is warning of a deepening humanitarian crisis.

“The levels of violence and the use of lethal force that have resulted in so many casualties and grave injuries amongst the population is deeply shocking. Myanmar Red Cross first aid teams working on the frontlines of this emergency have provided care to over 2,000 people, often at great personal risk.”

“In some instances, Myanmar Red Cross first aiders and medics have been wrongfully arrested, intimidated or injured and Red Cross property and ambulances have been damaged. This is unacceptable. Health workers should never be a target. They should be granted unrestricted humanitarian access to people in need.”

With major disruptions to emergency medical services, Myanmar Red Cross is one of a few organization’s currently able to help across the country, thanks to their nationwide network and levels of acceptance with local communities. Close to 2,000 Red Cross volunteers are working at 246 first aid posts set up in 175 townships across the country. The Red Cross also operates a fleet of 142 ambulances which have been used to treat and evacuate the seriously ill or wounded.

On its part, the IFRC released funding from its Disaster Relief Emergency Fund (DREF) to help the Myanmar Red Cross sustain nationwide reach of its emergency first aid and medical transport services to aid an estimated 22,500 people until June, 2021. Longer term plans are rapidly being developed in line with escalating humanitarian needs in the months ahead.

The current state of unrest poses a significant threat to efforts to contain the COVID-19 pandemic in Myanmar where testing, tracing and treatment capacity has been markedly reduced in the past two months.

“In the coming months we could be facing a perfect storm in Myanmar where another wave of COVID-19 infections collides with a deepening humanitarian crisis spreading across the entire country.”

The IFRC is also worried that the current political crisis could destabilise ongoing humanitarian programmes in Myanmar.

According to the World Health Organization, between 1 February and 24 March, 2021, there were 31 attacks on health-care facilities and staff, resulting in two deaths and six injuries. Dozens of facilities and several ambulances have been affected in 12 states and regions.

Since 1 February 2021, Myanmar has been undergoing a political crisis with civil unrest leading to a humanitarian crisis affecting people across many parts of the country.This Emergency Appeal seeks a total of CHF 4.5 million to enable the IFRC to support the Myanmar Red Cross Society to deliver humanitarian assistance and support to some 236,400 people for 10 months.