Beirut / Sanaa / Aden, 8 July 2022 – As we face an unprecedented global hunger crisis, concerns for the 16.2 million people who have long been food insecure in Yemen are at an all-time high. While the crisis in Yemen is one of the most dire, brought on by protracted conflict, droughts, and floods intensified by the climate crisis, COVID-19, and other diseases, it has failed to attract adequate support from donors for years. Now it risks slipping further into oblivion.

IFRC Regional Director for the Middle East and North Africa, Dr. Hossam Elsharkawi, made a field visit to Sanaa, Aden, Amran, and Lahj this week, where he witnessed first-hand the immense unmet needs for nutritional supplements and medicine, and the many cases of children suffering from severe acute malnutrition.

“I’m extremely heartbroken at the devastating level of hunger and severe malnutrition of babies, children, and women in Yemen,” he said. “As I looked in the eyes of those suffering mothers and children, I was at a loss for words This is plain wrong and unnecessary suffering for innocent civilians.”

There are already massive gaps in funding the humanitarian response for the 20.7 million people in need of assistance in Yemen, including clean water and healthcare as well as food and nutrition. Now, as the conflict in Ukraine pushes up the prices of food, fertilizer and fuel, the situation is likely to worsen. Meanwhile, the rapidly increasing needs of people around the world will also spread humanitarian resources even thinner. 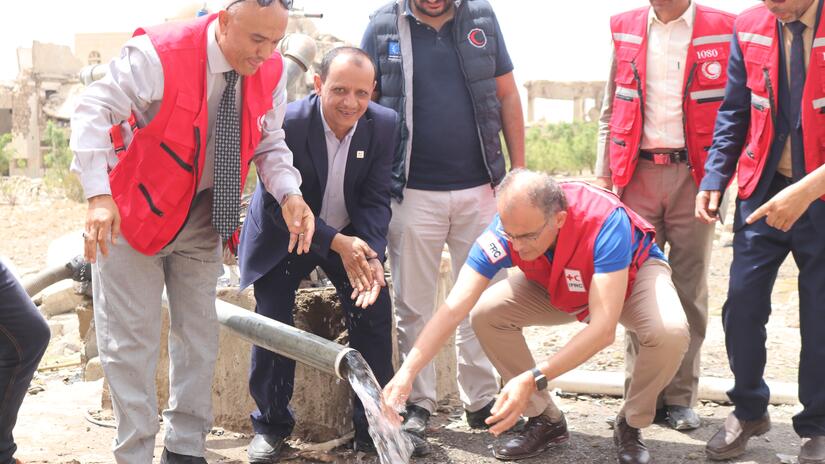 Dr. Elsharkawi met with YRCS leadership and volunteers as well as Yemeni officials around Sanaa, Aden, and Lahj to discuss the humanitarian response gaps as well as the programmes supported by the IFRC.

He saluted the extraordinary efforts of the thousands of dedicated staff and volunteers of the Yemen Red Crescent:

“These men and women are working tirelessly on the front lines to support the people in need and to preserve their dignity despite the complex situation. But our moral responsibility demands more urgent action to save lives now. The international community and donors must immediately scale up support to address the widespread hunger and malnutrition.”

Key figures on Yemen for editors: (Based on the 2022 HNO analysis)

To schedule an interview or for further information: