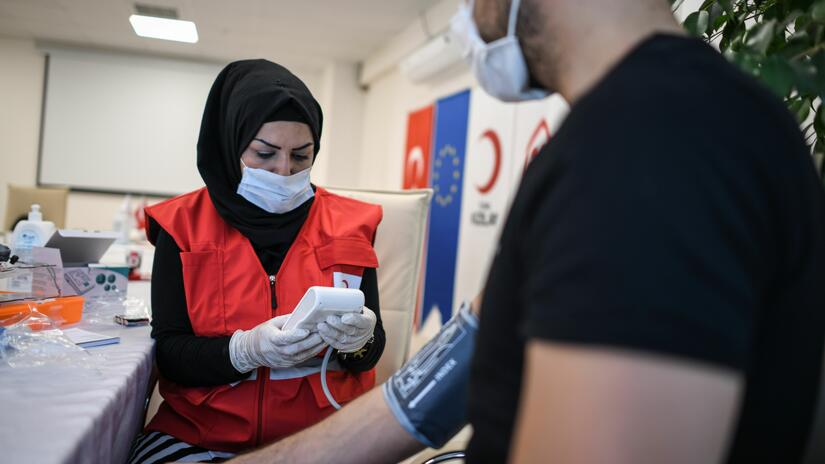 "Yardim seven ol" means "be someone who loves helping" in Turkish. This is a mantra that Kevser, a Syrian refugee in Turkey, lives by. While trying to rebuild her own life after fleeing conflict in Syria, she works as a volunteer at the Turkish Red Crescent to help vulnerable people in the community.

Like the rest of the world, COVID-19 has had a severe impact on Kevser and her family, as well as many other refugees who are particularly vulnerable. Spending three months in lockdown, her husband was not able to work and their debts ballooned. They were able to help pay their debts through cash assistance from the Emergency Social Safety Net (ESSN), which provides monthly cash assistance to more than 1.7 million refugees in Turkey, funded by the European Union and implemented by the Turkish Red Crescent and IFRC. Additional cash assistance over the last two months was provided to families, like Kevser’s to help ease the socio-economic burden brought on by COVID-19.

However, this hasn’t stopped her from helping refugees like her and other people in need in the community – it has only helped fuel her.

Kevser has been a volunteer at the Turkish Red Crescent’s Community Center, funded by the EU, in Ankara’s Altındağ district for two years, visiting vulnerable households, informing people in need about available resources and referring them to related services when necessary.

“We are giving a range of seminars, such as understanding the law in Turkey, their rights, how to go to a hospital, family and children’s health, and the available in-kind assistance for those in need,” Kevser said.

Kevser’s volunteerism started back in Syria when she saw the unfolding violence around her in Damascus. She received first aid training and worked in hospitals while training others to become first responders.

“I wanted to do something for people, for whomever got wounded,” said Kevser.

Kevser and her family decided to leave Syria in 2015 when a bomb landed on their home.

“We had a beautiful life in Syria. I had my own business in Damascus. My kids were going to school, my husband was working. We lost everything during the war. We came to Turkey and started from zero,” Kevser said, adding: “It was a hard decision that we made for our children.”

Starting a life from scratch, finding a job while still learning the language in a foreign country was tough for her family. The support from the Turkish Red Crescent – both through the ESSN cash assistance and language training in the community centres, became a lifeline.

“The assistance has been crucial for us to pay the rent and bills, as my husband is not able to find jobs all the time,” she said. “Without assistance, our life would be very difficult. Turkish Red Crescent changed our life. I attended courses, became more active, I feel powerful,” Kevser added.

Learning the local language changed everything in her life, Kevser says. Her relationship with her neighbours improved, she attended vocational courses, she was able to go to the hospital on her own. It also gave her a chance to give back to the Turkish community as a volunteer.

"God willing, I will work, everything will be better," she said.

ESSN is providing cash to the most vulnerable refugee families living in Turkey. Every month, more than 1.7 million refugees receive 120 Turkish Lira (13.5 euros) via prepaid debit cards, enabling them to decide for themselves how to cover essential needs like rent, transport, bills, food, and medicine.

This article covers humanitarian aid activities implemented with the financial assistance of the European Union. The views expressed herein should not be taken, in any way, to reflect the official opinion of the European Union, and the European Commission is not responsible for any use that may be made of the information it contains.