"He called them hope plants": Supporting people's mental health in the Ukraine crisis 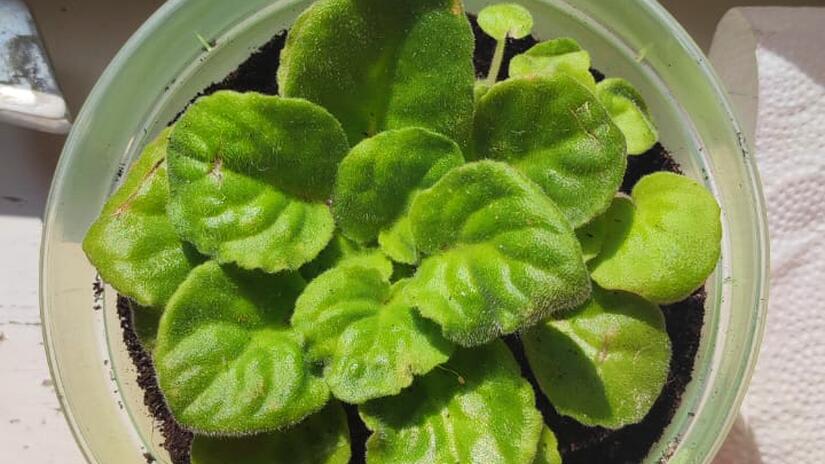 A "hope plant" from Kharkiv, lovingly carried by a man and his wife all the way to Hungary as they flee conflict in Ukraine. A remnant of their former life, to them these plants represent hope that life may return to normal one day.

In the town of Zahony, Hungary, on the border with Ukraine, a team of 20 health specialists from the Spanish Red Cross has been working with the IFRC and Hungarian Red Cross to meet the mental and physical health needs of people fleeing the conflict in Ukraine. Katie Wilkes, IFRC Communications Delegate for the Ukraine crisis, reports.

A simple search for “Kharkiv” on the internet today yields scenes of grey ash covering splintered buildings. This is how much of the world now sees Ukraine.

Far from this perception are locals’ memories of crackling fireplaces and walks under the trees—so many of which now stand lifeless.

But at least one small clump of spring green remains—a few little plants in one Kharkiv resident’s back yard. The only ones to survive raining missiles in a garden once lush and vibrant.

“He called them hope plants,” says Ana Blanco, one of 20 emergency responders from the Spanish Red Cross working in Zahony, Hungary.

“He and his wife arrived at Zahony train station with two of them, having travelled all this way from Kharkiv. And every day I’d see them take such great care and pride ensuring they stayed alive on the windowsill of the shelter.”

For this man, these plants are his token of home. And while they may not be the most practical thing to carry with him on his journey, Ana understands they are vitally important to his mental wellbeing. 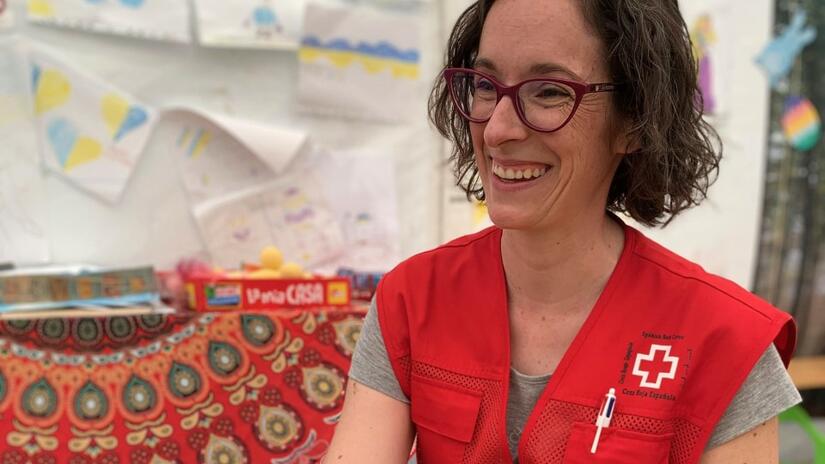 Ana Blanco, an emergency responder from the Spanish Red Cross, sits in a health centre in Zahony where she offers mental health support to people fleeing the conflict in Ukraine.

Having been an emergency responder with the IFRC since 2011, Ana knows that survivors of disasters and conflicts can be resilient. She’s seen it with her own eyes while providing emergency relief in Puerto Rico after Hurricane Maria, and water and sanitation support after the 2015 Nepal earthquake.

But this doesn’t mean hope always flourishes on its own.

That’s what brought Ana from her home in Valencia to Zahony—her experience teaching her that supporting the mental health of people affected by disaster or conflict is just as important as supporting their physical health.

She came with 20 fellow health specialists from the Spanish Red Cross to work alongside the Hungarian Red Cross, ensuring their teams have what they need to meet people’s immediate mental and physical health needs. And to help set up a health clinic in Zahony so they can provide effective longer-term support too. 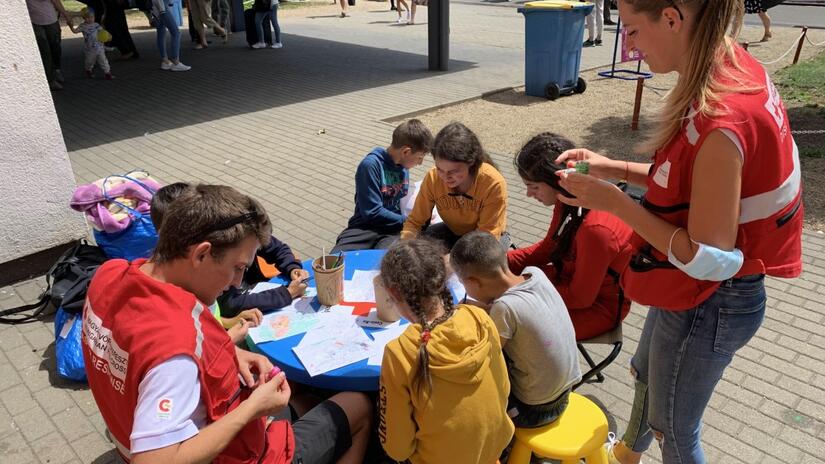 Hungarian Red Cross volunteers at Zahony train station on the border with Ukraine help children affected by the conflict to play and create art together. Games and art help them to express their feelings and enjoy a moment of calm while their families consider their onward journeys.

This is not Ana’s first time supporting refugees. Twice, she has worked in camps in Greece helping refugees express their emotions through art therapy. Her eyes light up as she speaks, “It was remarkable. Even though there was a huge language barrier, we relied on universal ways of communicating.”

“I grew up in a family that has always helped people. I feel something is missing in me when I see a crisis and I can’t go – if I’m not available to respond. It’s an earthquake inside of me,” Ana explains.

It’s this innate desire to help others, to be kind to others—shared by so many millions of our Red Cross and Red Crescent family—that has motivated Ana during her time in Hungary. For many weeks she’s worked patiently to get to know so many of the people staying in Zahony and build trust with them, helping them to open up. 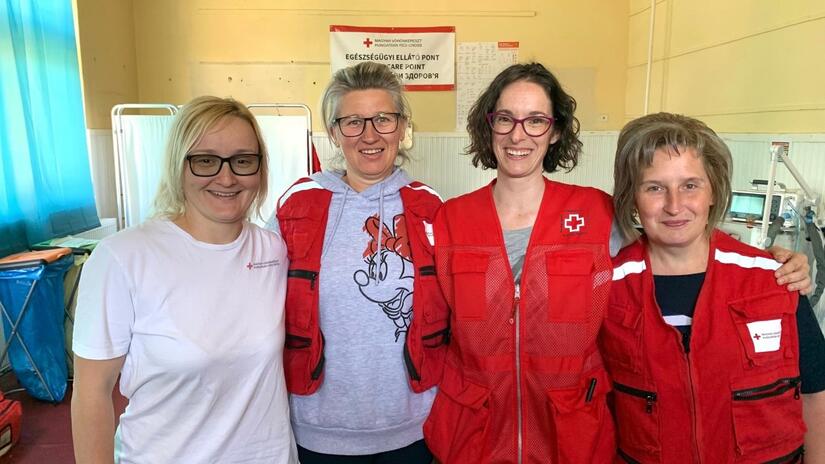 Speaking about another man she met early on who would sit alone on a bunk bed in the corner of the shelter, Ana says: “He didn’t want to go outside when I first met him. He’d been traveling alone, the possibility of reaching a friend abroad growing scarce.”

“Every so often, I’d say to him, ‘hope to see you at the train station!’ ‘Hope to see you around for a meal soon!’” And within a few days, she saw him emerge from the dark and step outside, interacting with her and the others.

On her last day in Zahony, Ana goes out of her way to help connect him with a helper on the other end of the phone. She finishes her mission knowing that for millions, home now looks very different to the one they once had. Many do not know where their journeys will end.

Ana holds a truth that so many disaster responders keep close to their hearts: we can never guarantee someone will be okay or that everyone will make it. But we do whatever we can to nurture seeds of hope, so that one day the lives of people affected by crises such as that in Ukraine can fully bloom again.

Click here to learn more about the IFRC's Emergency Appeal for Ukraine and impacted countries. If you would like to donate to support our work responding to this crisis, please click here.

You can also visit our mental health page to learn more about the IFRC's work providing mental health and psychosocial support around the world. 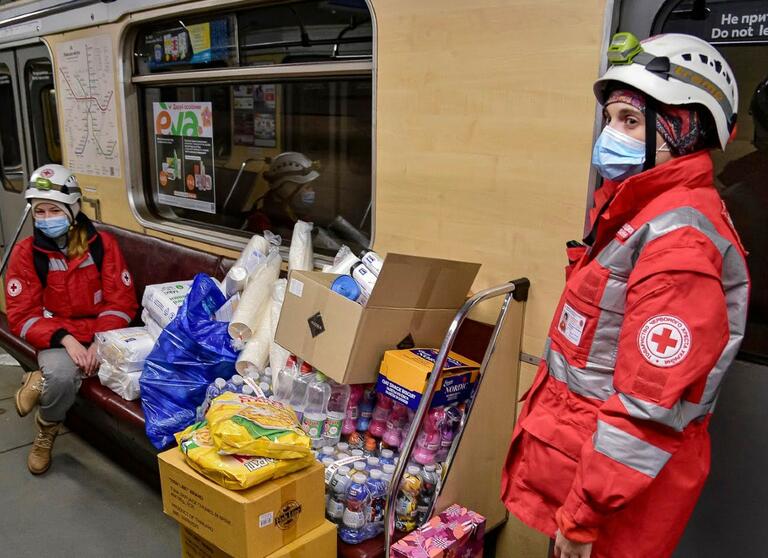 Due to the conflict escalation in Ukraine, millions of people have left their homes and crossed into neighbouring countries. The Ukrainian Red Cross is helping people affected by the conflict as the security situation allows. National Societies in surrounding countries, with support from the IFRC, are assisting people leaving Ukraine with shelter, basic aid items and medical supplies. People from Ukraine will need long-term, ongoing support. Our priority is addressing the humanitarian needs of all people affected by the conflict, inside and outside Ukraine.