Picking up the Pieces – Belize one month after Eta 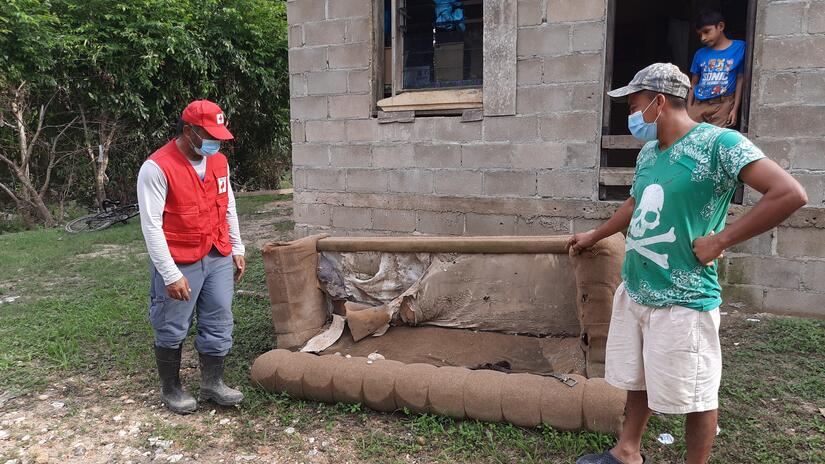 Belize, 21 December 2020: More than one month after flooding from Hurricane Eta affected Belize, the impact could still be seen in some parts of the Central American country.

In some flooded communities, water levels were still relatively high. In other communities, even though the water level receded, the water marks on houses and furniture and other items placed out in the sun to dry, were a tell-tale sign of the damages that were wreaked by the rainfall and flooding, first by Eta, then by Iota a couple weeks later.

“I’ve never seen this before,” Larry Jimenez shared as he sat on a stool right outside his home, which was perched on the banks of the Mopan River. “I’ve lived here in Bullet Tree Falls around seven years and this is the worst I’ve seen it [the flooding].

Larry and his family had to evacuate their home when the river behind his house started rising due to heavy and consistent rainfall from Hurricane Eta. They returned days later to everything in their home completely damaged by water, which had covered up to 9 feet of his house. They managed to save a few items including clothes and some important documents before they evacuated, but everything else was water-logged.

Now back home, they are trying to pick up the pieces and still salvage what they can. As Larry relayed the ordeal, his children and niece and nephew sat nearby playing on the remains of a couch outside, which had been damaged by the flooding.

Over in Maskall Village in Belize district, Teresita Madrill explained that the water had risen over her knees and while she has seen her community flooded before, this is the first time in years that she has seen it like this. “It has definitely gotten worse. We had to move out and stay with family members elsewhere until the water went back down,” she stated. She said when they returned, they could hardly go in the house. Since then, while she has managed to clean up most of the house, some items were damaged.

Her husband and son are a wooden sculptor and carpenter respectively and the wood they used were also drenched and had to be tied to trees in the yard, so they did not float away. Since the water receded, the wood pieces have been laid out in the sun to dry so they could still be used.

Joel Sutherland shows the impact of the flooding on his home in Scotland Halfmoon, Belize district[/caption]

For Joel Sutherland and his family in Scotland Halfmoon in Belize district, the experience was unexpected. “It was a very frightening situation for us, the water just continued rising and when we got up in the morning, the entire yard was flooded,” he shared as he pointed to the water which had settled in his yard. “I have three canoes because I am a fisherman, so I use them for fishing, but they came in very handy with the floods, as I used them to take my family from the house, across the water to the road,” he added.

The Belize Red Cross has been responding by assisting with damage assessments and distributing well needed items such as food packages, cleaning kits, blankets, tarpaulins, hygiene kits, jerry cans (water containers) and COVID-19 kits in several of the affected communities.

Lily Bowman, Director General of the Belize Red Cross, stated that these same communities have also been feeling the effects of the COVID-19 pandemic.

“Belizeans have been experiencing challenges even before the hurricanes with COVID-19 and the Belize Red Cross had been helping families by distributing food packages, especially to those who lost their income as a result of the pandemic,” she noted.

Now, the response must be merged.

“With the flooding, we find that we have to be doing a dual response – attending to the needs of those impacted by the flooding while also carrying out our COVID-19 response activities, all while trying to ensure the health and safety of our staff, volunteers and beneficiaries,” she explained.

Additionally, through a partnership with UNICEF Belize, US Embassy Belize and the National Emergency Management Organization (NEMO), the Belize Red Cross recently assisted in distributing food and hygiene packages to communities in Cayo district which were also impacted by the flooding.

Larry’s family was one of those who received packages. “I really appreciate the help from Red Cross and partners, it’s helping us a lot because right now things are hard,” shared Larry, who usually does maintenance at a resort, but with COVID-19 and now the floods, he has not had much work.

When asked what is next for him and his family, in a true spirit of resilience, Larry replied, “we can’t just leave ourselves and do nothing, we have to keep going, we have to go forward.”

The Belize Red Cross, which is a member of the International Federation of Red Cross and Red Crescent Societies (IFRC), will continue providing relief and recovery assistance, with IFRC’s support, to over 1000 families (approximately 5000 persons), to help them pick up the pieces and recover from Eta.

The IFRC is the world’s largest humanitarian network, comprising 192 National Red Cross and Red Crescent Societies, working to save lives and promote dignity around the world.

For more information or to arrange media interviews, please contact: