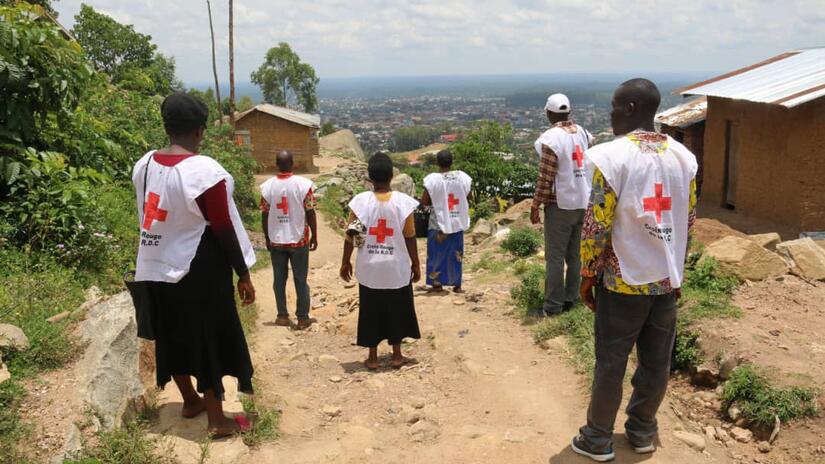 Friday, September 21, 2018Door-to-door outreach community engagement team in the Malepe and Rwangoma neighborhoods located on the Mont Beu in Beni city, more than 80 households were made aware of the

Kinshasa/Nairobi/Geneva, 20 March 2019 – The Secretary General of the world’s largest humanitarian network has called on organizations responding to Ebola in the Democratic Republic of the Congo (DRC) to place more emphasis on deepening understanding of communities and partnering with them to respond to their needs.

Speaking at the end of a three day visit to the DRC, Elhadj As Sy, the Secretary General of the International Federation of Red Cross and Red Crescent Societies (IFRC), said:

“Communities are key to ending Ebola. Only with their engagement and active participation will we be able to stop this outbreak. Fear, resistance and even denial are often encountered when people are overwhelmed by shocks, hazards and epidemics; but they can be overcome building on community norms, values and social capital.”

“Mistrust, coupled with violence and insecurity, challenge our response; so we welcome the growing concerted efforts to actively listen to communities and accompany them to be part of the solution,” said Mr Sy.

Ebola operations in North Kivu have been hampered by violence against responders and treatment facilities. However, despite these challenges, 1,300 Red Cross volunteers, all from Ebola-affected communities, are continuing to conduct safe and dignified burials and are involved in community engagement and accountability work. They have conducted nearly 2,500 safe burials, almost five times more than the officially reported number of Ebola deaths. They further reached close to 905,000 people with locally adapted information and collected their feedback to continuously improve on our response.

The Ebola outbreak which began in August 2018, has hit communities in 20 health zones in North Kivu and Ituri provinces. It has not spread to other urban areas or across the border into neighbouring countries of Burundi, Rwanda, Uganda, and South Sudan; but the risk remains very high.

“Ebola does not respect borders. We are treating this as a regional threat and calling for urgent scale up of preparedness efforts in North Kivu and Ituri provinces and in neighbouring countries,” said Mr Sy.

The DRC Red Cross is set to strengthen its Ebola operation with the support of Red Cross and Red Crescent Movement partners.

Mr Sy travelled to Kinshasa, Goma and Bunia alongside Henrietta Fore, Executive Director for the UN Children’s Fund (UNICEF) and Mark Lowcock, Head of the United Nations Office for the Coordination of Humanitarian Affairs (UNOCHA). They met with the President of DRC and Head of State, Felix Tshisekedi, other Government representatives, Red Cross staff and volunteers and humanitarian partners involved in the Ebola response
Ebola
Democratic Republic of the Congo
IFRC Red Cross of the Democratic Republic of the Congo