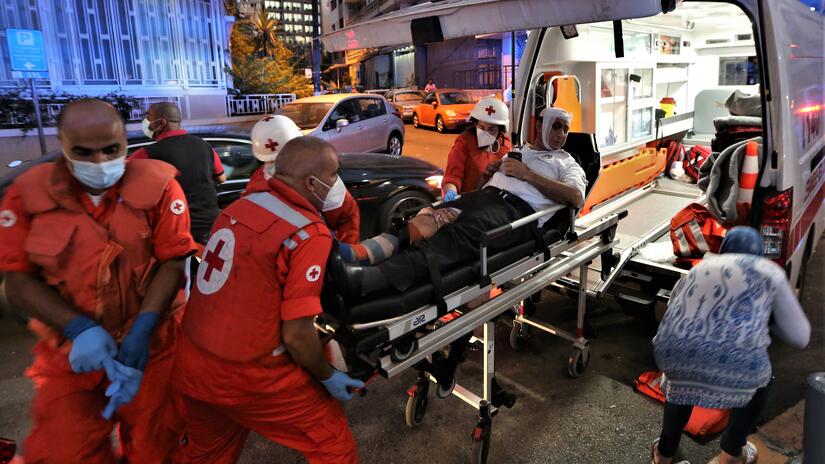 Medics shift an injured person from Najjar Hospital to another hospital in Al-Hamra area in Beirut after Port explosion, in Beirut, Lebanon, 04 August 2020. According to media reports citing official

Hundreds of Lebanese Red Cross emergency medical personnel and 75 ambulances are still at the scene of yesterday’s devastating explosion at the Port of Beirut, looking for survivors and rushing injured people to hospital for life-saving treatment.

More than 100 people are feared dead and thousands were injured in the disaster, and many people are still missing. The Lebanese Red Cross has set up triage and first aid stations to ensure that people with non-critical injuries can be treated and comforted while the worst-affected survivors are being taken to hospital.

The blast rippled through several areas of the capital, shattering windows and doors, and wounding many people. There are reports of significant damage to structures in the nearby downtown area – mostly broken windows due to the blast and collapsing balconies.

The Jordanian Seismological Observatory has estimated that the explosion was equivalent to a 4.5 magnitude earthquake, and the sound of the blast could be heard as far away as Cyprus, located 240km away in the Mediterranean Sea. The cause of the disaster remains unclear and investigations are still underway.