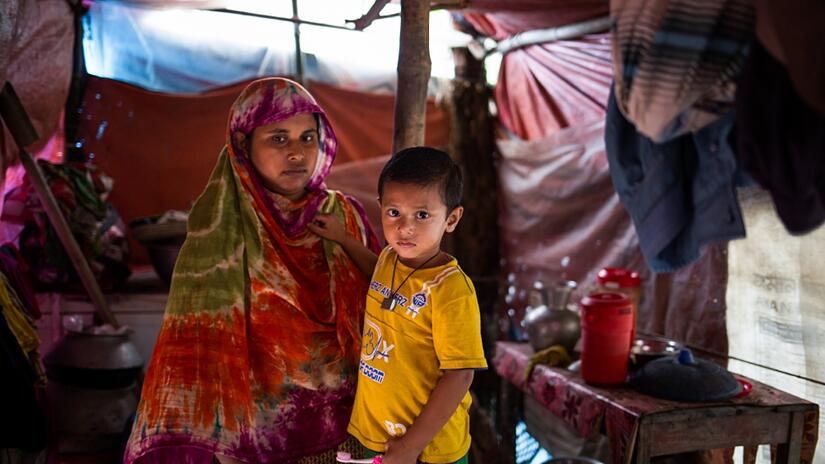 Bangladesh, Sirajganj, Aug 2020.A mother and her son standing inside the makeshift shelter they have been living in for the past two months. They received tarpaulins from Bangladesh Red Crescent and I

In South Asia, more than 25 million people have been battling four crises in one year. Floods came as COVID-19 and climate change worsened poverty and loss of livelihoods. Thousands of villages have been submerged for months. In north Bangladesh, homes and crops have been destroyed four times. Some of the worst floods in decades followed a cyclone that already caused widespread devastation.

Ahead of these disasters, Red Cross and Red Crescent has twice provided early action emergency cash, helping more than 35,000 people most at risk to evacuate safely and recover quicker. This forecast-based action is also being embraced by the United Nations and other agencies as a critical step to address the growing needs of millions of people at the mercy of climate disasters.

Millions have been living in tarpaulin shelters on road sides and any high ground available, as their homes have been under water for months. At one point more than half of Bangladesh was submerged. The floods have also affected millions of farmers, destroying crops and threatening to push millions of people, already badly impacted by COVID-19, further into poverty and food insecurity.

These floods are testing the resilience of some of the world’s most fragile communities, who have long been trying to escape poverty. Having borrowed money to build a home for his young family only four months ago, 35-year-old Sumon is now faced with a repair bill he can little afford, and ongoing unemployment due to the floods and COVID-19.

Khadiza, 19, was forced to leave her house with her two sons – three-months and two-and-a-half years old – when the floodwaters submerged their village in northern Bangladesh. The country has seen three devastating monsoon flood seasons in the past four years. In 2019, more than seven million people were swamped while in 2017 over eight million people were severely affected, losing homes and livelihoods.

These floods and water-borne diseases that follow in their wake are putting increased pressure on health-care systems stretched to the limit and struggling to cope with COVID-19. Red Cross and Red Crescent health teams are supporting the most at risk communities to have access to basic healthcare.

Janina Begum, 60, came back from her roadside tarpaulin shelter to check on her home that had been submerged for two months. While some people are looking to rebuild, Bangladesh’s monsoon season is far from over and the threat of new flooding hangs in the air. These threats have multiplied with climate disasters happening more often in Asia, the most disaster-prone area in the world.

Asharam, 60 unpacks relief items after returning to his home that had been completely submerged in Mahangu Pure village, Uttar Pradesh, northern India. More than 20 million people have been devastated by the floods in India, mainly in Assam, Bihar and Uttar Pradesh, with many already poorer communities losing their homes and livelihoods.

Indian Red Cross and Bangladesh Red Crescent volunteers are doing all they can to provide relief in the most difficult circumstances they have ever faced. The volunteers say they have a duty to support people, who are tackling growing hardships caused by the floods, poverty, COVID-19 and the increasing effects of climate change.

Mossamet Sahera, 60, had her home washed away. Sahera was living in a small hut next door to her sister. Her husband left her when she was young because she had a physical disability. Sahera and her sister face an uncertain future.