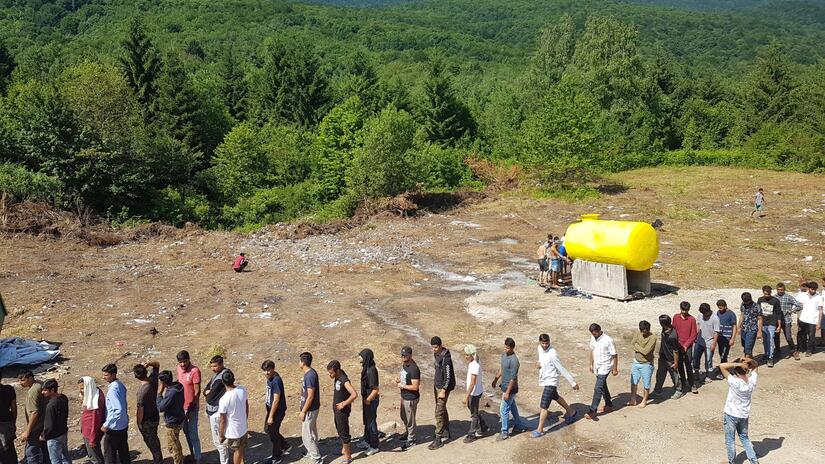 Violence and poverty drive millions of people from their homes every year. Thousands end up in the Balkans after long and dangerous journeys over land and across the Mediterranean.

“Many flee conflict ravaging their countries of origin. Some have lost a father, a mother, a brother, a sister… or even their entire family because of war. Others didn’t want to be conscripted into the military and be forced to kill other people. Or they graduated from the best universities but did not have job opportunities to secure their future.”

That is how Farouk Hwedy, from Syria, described the refugees and migrants he is assisting as part of the Mobile Team of the Red Cross Society of Bosnia and Herzegovina in Sarajevo.

He left Damascus in 2013 and arrived in Sarajevo five years later, after travelling through Saudi Arabia, Turkey and Greece. Grateful for having reached a safe haven, he is now giving a hand to others.

“We are helping people from Syria, Iraq, Palestine, Pakistan, Afghanistan, Algeria, Morocco, Tunisia… For me, it is a great honor to serve them because I know what they have been through and what they are suffering from. I know what they are missing, as it happened to me as well,” he explained.

With support from the International Federation of Red Cross and Red Crescent Societies (IFRC), the Red Cross Society of Bosnia and Herzegovina has been running Mobile Teams across the country since March 2019, and currently has 11 teams, which have had to readjust their work as new challenges emerge.

“Before, I used to wake up every morning to go to reception centres, squares or bus stations with my colleagues to see migrants, listen to them and help them. With the COVID-19 pandemic everything has become difficult, but I love my work and I do my best to help more,” highlighted Farouk.

Exhausted or disoriented, some people just want a listening ear. However, most are also lacking basic necessities, are injured or need other types of support. Farouk has to reinforce COVID-19 prevention and provide people with personal protective equipment.

“We make every effort to explain the epidemiological situation to migrants, the risks, how to minimise them and prevent infections. We give them hand sanitisers and anything else they may need when we see them on our visits,” he added.

So far, the mobile teams of the Red Cross Society of Bosnia and Herzegovina have distributed 244,200 food parcels, 169,400 non-food items (including blankets, clothes and sleeping bags), 42,700 hygiene kits and 16.200 personal protective items including masks and hand sanitiser. In addition, they have administered psychosocial support or first aid services more than 140,000 times.

Farouk is delighted to be part of a Mobile Team. “Volunteering with the Red Cross is one of the most positive things in my life, it makes me happy,” he said.

Looking at the picture of a toddler they recently assisted, he remembered him dearly. “I wish this child every success. We met him at the bus station and I will never forget him. He was coming from Serbia with his parents and had an indescribable smile. He started playing with us as if he had finally found safety.”

He hopes the pandemic will end soon, and that people will grow more understanding of refugees and migrants: “At the end of the day, what everybody is looking for is just a decent life, a better future.”