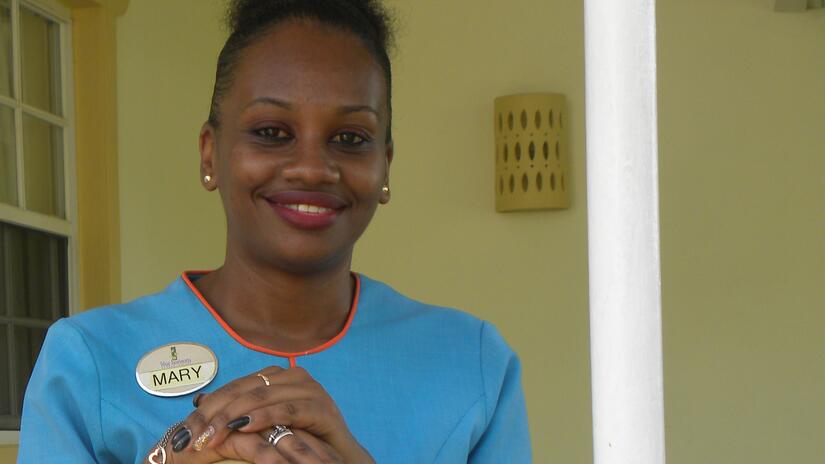 Mary Lewis is poised… It’s one of the first things that you notice about her, aside from other obvious physical characteristics like her bright, beautiful smile. That this young, ambitious Grenadian seems ready to handle anything that may come her way should come as no surprise, after learning that she has spent the last eleven years in the hospitality industry.

Her easy, self-possessed manner serves her well in her position as Supervisor ay the Blue Horizons Hotel, located in St. George’s, Grenada. It’s a trait that helped her to save the life of a guest of the hotel not too long ago. That and the first aid training provided by the Grenada Red Cross.

It was that training and her enviable calm that allowed her to recognise the signs of a stroke when she was called upon to assist a guest who was found unresponsive in the hotel in early 2019. In 2017 or thereabouts Mary, along with other members from varying departments at Blue Horizons, was selected by hotel management to participate in first aid training that was being offered by the Grenada Red Cross. The training which can sometimes be referred to as BLS or basic life saving took place at the offices of the Grenada Red Cross. There the staff members of Blue Horizons learnt CPR, how to deal with a stroke patient, how to use a defibrillator, the signs of a heart attack and how to deal with burns.

It was an ordinary evening at the hotel, Mary was following her usual routine preparing for the arrival of guests when she was called upon by her Manager to respond to an emergency. A guest had called and indicated that his wife was unresponsive on the floor of the bathroom. “My heart went down in my toe”, was how she described her initial reaction at having to put into practice all that she learnt because she was concerned about remembering everything. But when she arrived at the room her natural calm took over and she told herself, “you put on your brave hat now”. In fact, it was her presence that allowed the ill guest’s husband to also remain calm and answer Mary’s questions about his wife’s medical history. The couple’s eleven year old son also helped by providing details about their activities that day.

Luckily for that family, Mary was able to immediately make a number of observations about the woman’s condition: her inability to move one side of her body, the difficulty she was having speaking and the secretions coming from her mouth. She recalled from her training that she had keep the ill person alert and awake if they are conscious and she did that by talking to her until the ambulance came. Though the ordeal only lasted for forty-five minutes it is probably an experience that none of the parties involved will ever forget. The woman was flown via air ambulance to Miami and her husband sent word back to the hotel that she is doing ‘ok’.

“Good Mary, you did very well.” That is what Mary told herself when it sunk in that she saved someone’s life. She is glad and proud of herself that she was able to use the knowledge gained from the training to save the woman’s life. Her Manager is also very happy with her and probably with the investment made in the staff learning life saving techniques.

That was not the only person Mary saved, however, as she recently experienced a situation that hit much closer to home. She again put her training to good use and was able to save the life of a family member. Despite them residing in America, more that two thousand miles away, Mary was able to convince her stepmother to go the hospital based on a description given by her father. This description was given to her over the phone but she was still able to recognise the signs and urge them to seek treatment. At the hospital it was determined that her stepmother had indeed had a mild stroke.

Now that she has successfully utilised her training on more than one occasion Mary Lewis is confident that she is capable if called to act in an emergency, all thanks to the Grenada Red Cross.
First aid
Americas Grenada
Cruz Roja de Granada Grenada Red Cross Society