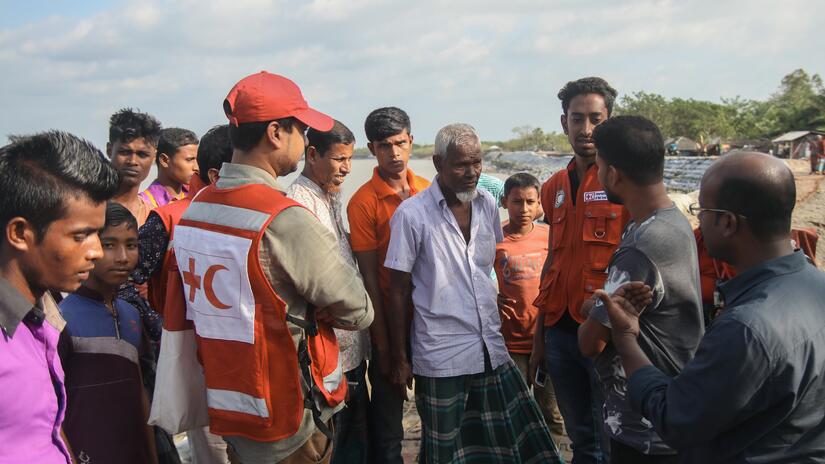 Over the past 10 years cyclones have affected more than a million people in Bangladesh, and early action can help reduce the impact. Photo: Sajid Hassan/IFRC

As super cyclone Amphan heads towards the West Bengal-Bangladesh areas, Bangladesh Red Crescent has triggered the release of forecast-based funds from International Federation of Red Cross and Red Crescent Societies (IFRC) to reduce the storm’s impact on vulnerable communities living in the nine coastal districts of Bangladesh.

According to the Needs Assessment Working Group (NAWG) in Bangladesh, more than 14.2 million people are in the path of the cyclone, of which 7.2 million are women and 1.4 million are children. This has put these communities at a dual risk amid the existing COVID-19 pandemic.

This forecast has triggered the pre-agreed release of 134,317 Swiss francs (138,000 US dollars) from IFRC’s designated fund for anticipatory action, Forecast-based Action by the Disaster Relief Emergency Fund (DREF).

The funding will help support more than 20,000 vulnerable people with emergency dry food and drinking water, first aid, safety equipment, and transportation facilities to cyclone shelters, as well as support precautionary measures against COVID-19 through the disinfection of cyclone shelters and provision of personal protective equipment sets.

“In the midst of the COVID-19 epidemic, the Bangladesh Red Crescent has been working tirelessly alongside local authorities, sharing early warning information and pre-positioning relief supplies, as well as having teams to support evacuations as super cyclone Amphan approaches Bangladesh.

“With the Bangladesh Red Crescent Society, we are enabling communities to take all sorts of preparedness measures to reduce the loss of life and livelihood in the coastal districts including the camps in Cox’s Bazar, where around one million displaced people reside in temporary shelters. Forecast-based actions mean the communities no longer wait for a cyclone to hit, rather anticipate it and act early.”

“We have seen many mega cyclones in the past that have brought massive devastation in this region. This funding allows Bangladesh Red Crescent to take actions to reduce the impact of such an event.”

Combining weather forecasts with risk analysis allows IFRC funding to be released so people take early actions ahead of cyclones rather than only having access to support after they have been hit.

The goal of Forecast-based Financing is to anticipate cyclones, decrease their impact as much as possible, and reduce human suffering and losses. The key element is to agree in advance to release financial resources if a specific forecast threshold is reached. As part of this mechanism, an Early Action Protocol for cyclones outlines which anticipatory measures the Bangladesh Red Crescent Society will implement to reduce the cyclone’s impact. This work is developed by National Societies with the technical support from the Red Cross Red Crescent Climate Centre.

“We are scaling up our preparedness measures and early actions to save the lives of hundreds of thousands of people who are in the direct path of cyclone Amphan. The current COVID-19 crisis is slowing our efforts down, but our volunteers are not stepping back from reaching out to the most vulnerable communities.”

Over the past 10 years cyclones have affected more than a million people in Bangladesh, causing death and injury, destroying homes and undermining livelihoods.

The Early Action Protocol for cyclones in Bangladesh has been revised considering the current COVID-19 epidemic. While the priority remains to move people to safe shelters if an evacuation order is issued, Bangladesh Red Crescent volunteers are taking action to help prevent further outbreaks, including sharing hygiene information and items, identifying alternative evacuation spaces to enable physical distancing, and cleaning and disinfecting cyclone shelters.

This is only the second time IFRC’s early action funding mechanism has been used after over 210,000 Swiss francs were released to Mongolia Red Cross in January 2020 based on the forecast of an extreme winter season. The funding provided cash grants to vulnerable herder families to help protect their livestock and livelihoods.

“The impending cyclone, Amphan, is putting the lives of the most poor and vulnerable families at risk. By taking forecast-based early actions well ahead of the cyclone, the Red Cross and Red Crescent Movement is setting a precedent, especially in the face of this dual crisis. Bangladesh Red Crescent volunteers and the Cyclone Preparedness Programme will play a critical role in alleviating the distress faced by communities at risk.”