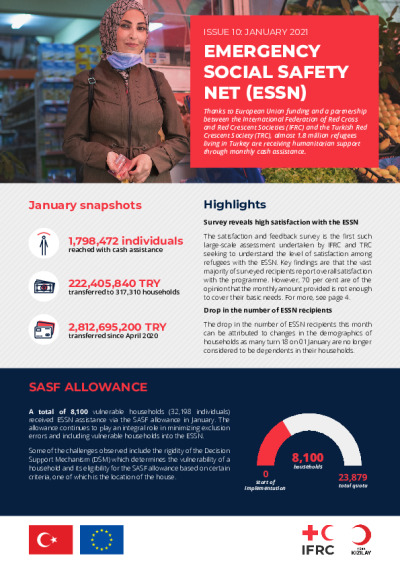 Survey reveals high satisfaction with the ESSN The satisfaction and feedback survey is the first such large-scale assessment undertaken by IFRC and TRC seeking to understand the level of satisfaction among refugees with the ESSN. Key findings are that the vast majority of surveyed recipients report overall satisfaction with the programme. However, 70 per cent are of the opinion that the monthly amount provided is not enough to cover their basic needs. For more, see page 4. Drop in the number of ESSN recipients The drop in the number of ESSN recipients this month can be attributed to changes in the demographics of households as many turn 18 on 01 January are no longer considered to be dependents in their households.

Socioeconomic impacts for refugees in Turkey one year on from COV...