A tsunami is a sea wave triggered by a large-scale displacement of the sea floor. They are most commonly caused by earthquakes but can also be caused by major underwater (or 'submarine') landslides or volcanic eruptions. They can strike any coast at any time. Tsunamis can move as fast as a jet plane across the open ocean and can hit land with waves higher than 20 metres. Water can wash inland for several kilometres in flat lying areas and move up streams and rivers, destroying everything in its path. Waves may continue to strike the shoreline for many hours and dangerous currents can continue for several days. Although a tsunami can't be prevented, its impact can be reduced when communities understand the risks, receive timely warnings and know how to respond. 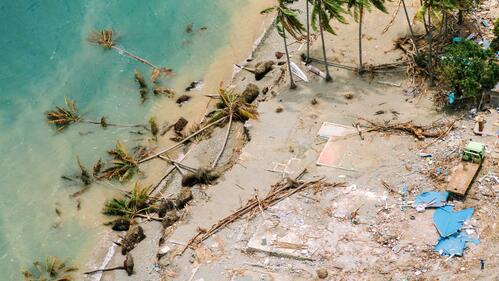 Do you know how to prepare for a tsunami?

Learn about your local risks and emergency alert systems for tsunamis and storm surges. Prepare an evacuation plan: identify higher ground (if possible 30 metres above sea level) and tsunami-safe shelters or structures in your community. Plan how you will evacuate and know the routes. Be ready to act on official tsunami advisories, including when it is safe to return.

Check with experts before you build in a coastal area: what are the local risks and what construction practices do they advise? They may also have advice on proper land use and how to prevent coastal inundation damage. Prepare evacuation routes and safe havens and practise evacuation at least once a year. If long-range warning time allows, secure unanchored objects.

Respond to natural warning signs and do not wait for an alert: in case of a very strong earthquake, move quickly to higher ground or as far inland as possible. Follow your evacuation plans and routes and keep up to date with official alerts and instructions via your phone/radio/TV. Beware of secondary hazards such as contaminated water, landslides and mudflows.

Learn about the local risks and history of tsunamis

Prepare an evacuation plan and route

Don't return home until authorities say it's safe to do so

Stay away from the coast, tidal estuaries, rivers and streams

Beware of secondary hazards, such as contaminated water

Practise an evacuation drill at least once a year

Watch: how to prepare for a tsunami

Key hazard-specific messages for individuals and communities on how to prepare for, and stay safe during, tsunamis.
Read more

What is a disaster?
Public Awareness and Public Education for Disaster Risk Reduction
Prepare your family and home