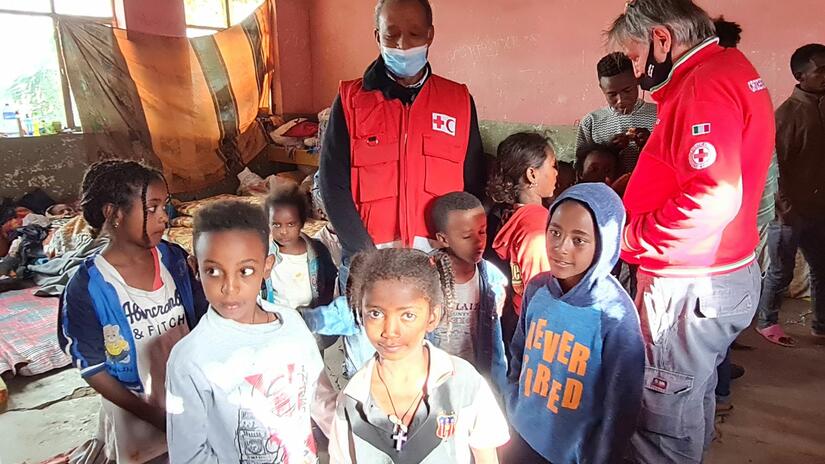 Addis Ababa/Nairobi/Geneva, 10 February 2021 – The President of the world’s largest humanitarian network has ended a visit to Ethiopia’s Mekele city in Tigray region with a plea for increased humanitarian response to better meet the needs of people affected by recent fighting.

Speaking at the end of his five day visit to Ethiopia, Francesco Rocca, President of the International Federation of Red Cross and Red Crescent Societies (IFRC), said:

“I am very concerned about the conditions that I saw during my visit, including people internally displaced by the fighting, especially children, their mothers and the elderly. It was clear to me that people in Tigray need much more support than they are currently receiving.

“While there have been positive announcements by a small number of aid organizations in recent days in this regard, it is my hope that more aid can begin to arrive consistently. We need to scale up humanitarian operations. We need to do much more to bring help to those who desperately need it.”

In particular, President Rocca raised concerns about the impact of the fighting on medical services, noting that hospitals he visited were lacking even basic medical supplies. He also shared serious concerns relayed by local health officials about rising levels of serious malnutrition.

An assessment by the Ethiopian Red Cross Society, found that more than 2.6 million people in Tigray and the adjacent regions of Amhara, Afar, Benishangul-Gumuz and SNNPR need humanitarian assistance. According to the Ethiopian Red Cross, primary needs among affected people in Tigray include food and basic relief items, water and sanitation, medical supplies and technical assistance for mobile clinics.

Mr Rocca also spoke of the compounding impact that the Tigray crisis has had on other vulnerabilities in Ethiopia, as well as in neighbouring countries. By the end of January 2021, an estimated 200,000 people had been internally displaced in Ethiopia alongside 60,000 people who have fled into Sudan. In addition, there are at least 230 Ethiopian refugees in Djibouti.

Mr Rocca further mentioned the heavy humanitarian caseload that was already confronting Ethiopia and surrounding countries, and the subsequent need for coordinated and comprehensive action by aid organizations:

“The Horn of Africa is facing chronic multiple crises, including widespread and severe food insecurity, and massive locust swarms that have contributed to further crop losses.

“The region is also grappling with the COVID-19 pandemic which, among other impacts, has led to the closure of schools. More than 6.4 million children are now without school meals and this has worsened malnutrition considerably.”

In response to the situation in Ethiopia and surrounding countries, the IFRC, the Ethiopian Red Cross, the Sudanese Red Crescent and the Red Crescent Society of Djibouti are jointly appealing for 27 million Swiss francs. This funding will allow Red Cross and Red Crescent volunteers and staff to assist 660,000 people, including the Ethiopians who are internally displaced and those who have fled into Sudan and Djibouti.

The operation will focus on supporting families to maintain their livelihoods and meet basic needs, the provision of clean water and improved sanitation facilities, the delivery of health and psychosocial support services, and efforts to strengthen local Red Cross and Red Crescent capacities to prepare for and respond to future emergencies.