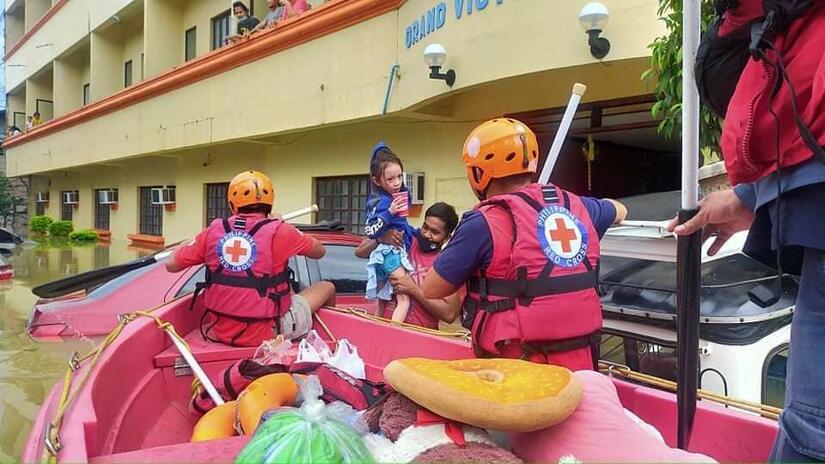 Kuala Lumpur/Manila/Geneva, 15 November 2020 – Catastrophic floods have completely submerged entire towns and villages in the northern region of the Philippines, forcing tens of thousands of people from their homes just days after Typhoon Vamco tore through the country.

Dozens of towns and villages have been devastated in the Cagayan Valley, north of the capital Manila as flood waters up to 12 metres deep swamped tens of thousands of homes.

Red Cross fears for the safety and wellbeing of thousands who remain trapped, with at least 47,000 people rescued so far according to local authorities. Initial assessments indicate around 90 per cent of homes have been flooded in Tuguegarao, the Cagayan provincial capital.

Red Cross teams have been working through the night searching in the floodwaters by flashlight and rescuing people stranded on rooftops.

“Our teams are urgently searching for people trapped in these horrifying floodwaters and rescuing people who have been forced to camp on their roofs. We’re making sure people have access to critical first aid, shelter, hot meals and safe drinking water.

“These floods are a calamity and the worst we have seen in Cagayan for at least 40 years. More Red Cross rescue teams and resources are being rushed to help with our massive rescue and relief operations."

The International Federation of Red Cross and Red Crescent Societies is releasing 750,000 Swiss Francs to assist with immediate relief for 40,000 people affected by the floods and Typhoon Vamco, including communities in Cagayan Valley. IFRC has also more than doubled an international Emergency Appeal to 8.5 million Swiss Francs, to support at least 100,000 people whose homes and livelihoods were devastated by Super Typhoon Goni earlier this month.

“These catastrophic floods are another sad and brutal blow for the people of the Philippines. This is a terrible triple disaster as these terrifying floods and two devastating typhoons strike communities already reeling from the health, social and economic impacts of COVID-19.

"We are urgently redoubling our support for the people of the Philippines, all while keeping people safe from COVID-19, in one of the most complex relief operations ever. People need immediate relief as well as longer term support to recover and rebuild livelihoods in the weeks and months ahead. We must build back better in the facing of recurring threats.”

The Philippines, specifically the island groups of Luzon and Visayas, were hit by a series of typhoons in quick succession in October and November 2020. Super Typhoon Goni and Typhoon Vamco caused massive damage to agriculture, infrastructure, and shelter—resulting in destruction and hardship to some of the most vulnerable communities in the country.