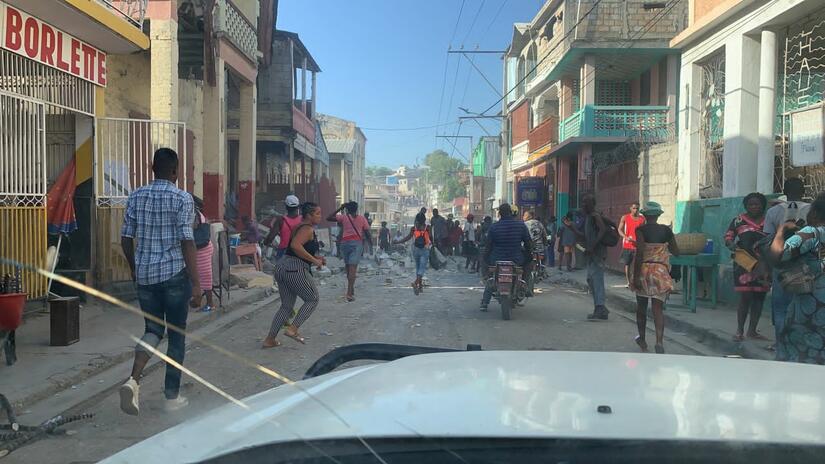 People in Haiti walk along a street partially destroyed by a 7.2 magnitude earthquake which hit the country on 14 August 2021

Port au Prince, Panama, Geneva, 14 August 2021 - On Saturday, 14 August a major 7.2-magnitude earthquake hit Haiti. According to Haiti's Office for Civil Protection, 227 have died and the figure is sadly expected to increase in the coming hours. Preliminary reports by Haitian Red Cross volunteers and IFRC staff on the ground confirm that the earthquake has caused severe damage to infrastructure, including hospitals, especially in Jérémie and Les Cayes, at the Northern coast of the Southern peninsula of the country.

Hospitals and hotels, as well as ports, bridges and routes are reported to have been damaged in Les Cayes and Jérémie, where churches collapsed while the morning mass was being celebrated. Search and rescue activities are concentrated in that area as there may be people trapped in the rubble.

Tropical Storm Grace is on its way and might affect the same areas that have been hit by the earthquake. In response to these compound crises, also taking into consideration the pre-existing vulnerabilities in the country, the IFRC has activated its global network of humanitarian aid specialists and is working on an emergency appeal to be launched within the next 48 hours with an initial allocation of up to 1 million Swiss francs from the IFRC’s Disaster Relief Emergency Fund (DREF).

“Life-saving efforts are the priority at this stage of the emergency. Providing support in search and rescue, first aid, emergency health care and shelter is a priority for the Red Cross.

“Together with the Haitian Red Cross, the IFRC is already working on the assessment of damages and needs in the affected areas, where services might have collapsed and homes have either been heavily damaged or fully destroyed, as well as roads and infrastructure in general. It is very likely that inhabitants have been forced to seek shelter.”

Providing psychological support is urgent as well, as many affected people went through the trauma of the 2010 earthquake. Preventing and controlling the transmission of COVID-19 and guaranteeing access to water, hygiene and sanitation, is also essential.

A humanitarian corridor in the Dominican Republic has been activated and prepositioned non-food items (NFIs) are ready for at leat 4,500 people. In addition, emergency items are prepositioned and available in Panama and the Caribbean.

Red Cross emergency specialists are currently being deployed to Haiti to support the assessment and immediate response in support of those affected, especially those who are most vulnerable, such as women, children, elderly and people with disabilities. 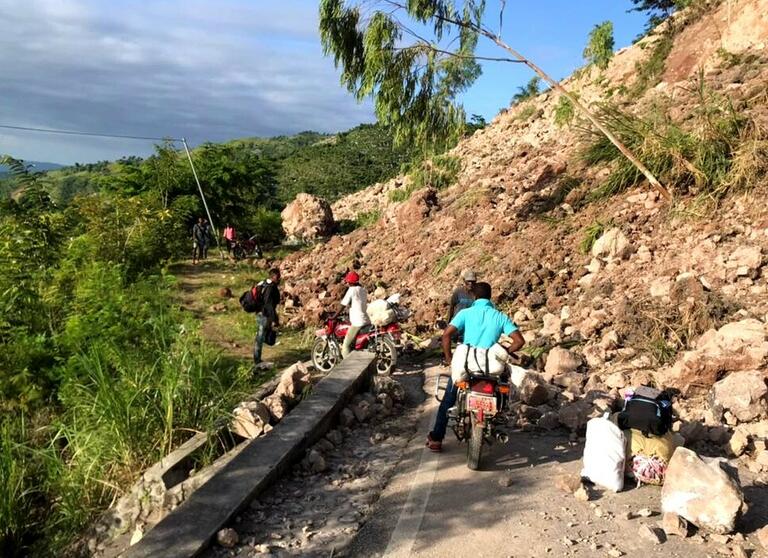 A major 7.2-magnitude earthquake hit Haiti on 14 August 2021, killing more than 2,000 people and causing widespread destruction to people's homes and infrastructure. The Haiti Red Cross Society responded rapidly to provide immediate humanitarian assistance to those affected. One year on, this Emergency Appeal is supporting the Haiti Red Cross response in their recovery and reconstruction phase—with a focus on shelter and essential household items, livelihoods support, health services, and rehabilitation of water, sanitation and hygiene (WASH) systems.