A Bangladesh Red Crescent volunteer stands on a bridge and looks out to sea. Every year, thousands of lives are saved by cyclone preparedness measures and early warning systems in which volunteers sound the alarm, evacuate communities and provide people with first aid and vital assistance. 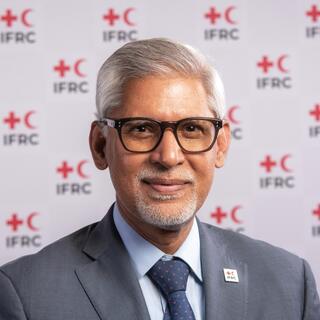 The Secretary General is the chief executive officer of the International Federation of Red Cross and Red Crescent Societies (IFRC) and directs the secretariat and our delegations around the world.

This speech was delivered during the launch event for the joint statement titled "The Resolve to Act on Early Warnings for All" at the 77th session of the UN General Assembly (UNGA).

Your Excellencies and Colleagues,

On behalf of the IFRC, thank you for inviting me to speak here today. Due to time, I kindly acknowledge all protocols to be observed.

I welcome the UN Secretary-General’s pledge on Early Warning Systems for All (EW4A). This pledge, rightly put in the hands of the World Meteorological Organization (WMO), is a very timely and achievable initiative that contributes to keeping people safe across the globe, but especially in the furthest to reach places, where the most at-risk and vulnerable to climate change live.

Since the establishment of IFRC’s Disaster Response Emergency Fund (DREF) over 35 years ago, IFRC and our member National Red Cross and Red Crescent Societies have supported governments prepare for, manage, and respond to disasters. Every year, DREF is used ahead of and in response to over 100 small and medium sized disasters and has supported over 200 million people.

We know from our long experience that early warnings that lead to early actions save lives.

Over the last decade, some of the most recent - and often predicted -extreme weather events were the most deadly, costly, devastating. Early warnings can only work if they are turned into early actions and response. Here is how:

First, improve the decision-making process, data and information to identify triggers and decide when and where to act before a disaster. What and who is likely to be impacted must underpin all our actions.

Third, and most importantly, create and adapt financing mechanisms, like DREF, that can disburse funds for pre-agreed plans ahead of the disaster to reduce the humanitarian impact. Additional funding is especially needed for early warning communications and dissemination and the ability to translate these warnings into action.

In the last decade, humanitarian organizations have invested in enhancing and transforming early warning systems into anticipatory action approaches. Adequate, sustained and coordinated resources are needed to bring these approaches to scale.

This requires a systematic shift in funding flows for us to move to scalable action. At the same time, early warning and early action systems need to be seen as development and climate issues, rather than exclusive humanitarian tools.

In closing, the IFRC network, along with the Risk-Informed Early Action Partnership (REAP) and Anticipation Hub, look to collaborate with WMO and other actors in investing in early warnings that lead to early actions and response.

Together, let us ensure that early warnings are clear, tailored, and people-centered, and that they support people in the furthest to reach places.