Nagorno-Karabakh: Starting over after losing everything 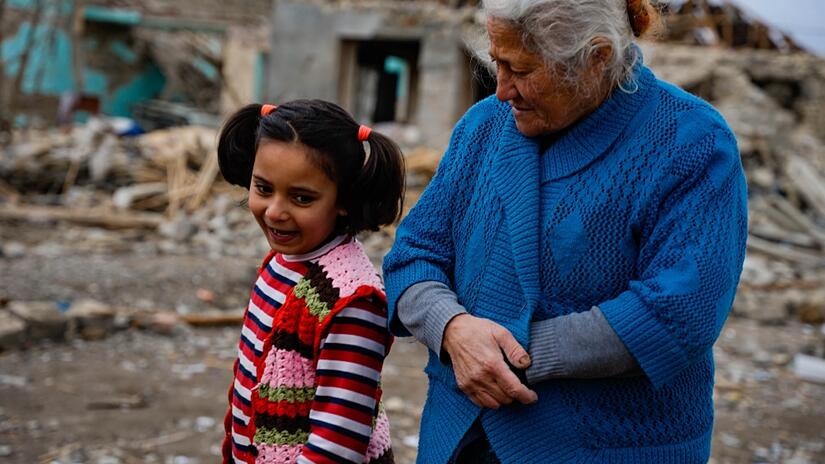 Ganja, Azerbaijan. November 2020. While some people affected by shelling have returned to their homes, many are staying with relatives, at shelters or in basements.

The IFRC is providing support to the Armenian Red Cross Society and Azerbaijan Red Crescent Society, in coordination with International Red Cross and Red Crescent Movement partners, to assist those affected by the Nagorno-Karabakh conflict.

In many regions in Azerbaijan, houses, shops, and public buildings show the devastating impact of a 30-year-old war. After the escalation of the Nagorno-Karabakh conflict on 27 September, cities, towns and other populated areas in the country were shelled, leaving behind destruction and loss. What was once a quiet residential area is now scattered pieces of debris that families are rummaging through to recover some of their old possessions.

November 2020. Azerbaijan. Thousands of buildings have been damaged or completely destroyed as a result of the Nagorno-Karabakh conflict.[/caption]

Residents of the houses share their stories of being awoken in the middle of the night by explosions and rushing to save their loved ones.

"My granddaughter screamed at the sound of the explosion", one resident recalls as he points to the place where his bedroom once stood. "All I could do was grab her and get out as soon as I could. I passed her through the window to my wife."

Ganja, Azerbaijan. November 2020. While some people affected by shelling have returned to their homes, many are staying with relatives, at shelters or in basements.[/caption]

The escalation of the Nagorno-Karabakh conflict in September has resulted in many injuries and deaths of civilians including women, children and elderly people. According to public authorities, during that time, a total of 93 Azerbaijani citizens were killed, 407 injured, and more than 40,000 households had their homes and livelihoods affected. Many of them had to leave their houses and stayed at temporary shelters such as schools, civic halls, kindergarten buildings, unheated basements or the homes of relatives or friends.

Fighting also had an impact on peoples’ income and ability to earn. Farmers had difficulty reaching their fields.  What’s more, this escalation had taken a heavy toll on the mental health of the population, who have already lived with the impact of this conflict for almost 30 years. Then the arrival of the COVID-19 pandemic only brought additional physical and mental health impacts.

Yevlakh, Azerbaijan. November 2020. With the support of the Turkish Red Crescent, the Azerbaijan Red Crescent Society is distributing essential items to over 1,500 households left without shelter as a result of the Nagorno-Karabakh conflict escalation.[/caption]

With people left without shelter and basic necessities as the winter conditions worsen, the Azerbaijan Red Crescent Society has been working with Movement partners to provide humanitarian assistance to people in need. Together, they deployed relief items to assist vulnerable households affected by the conflict. Since October, over 125,000 people in the country have received aid items, including winter clothing, bedding, kitchen sets, hygiene items, and personal protection equipment.

With an agreement to end the conflict signed on 10 November 2020, many are hoping that they can start healing and rebuilding what they have lost as a result of the conflict.

"We've all been through so much stress. Thank God that the war is over. Now we are getting treatment."