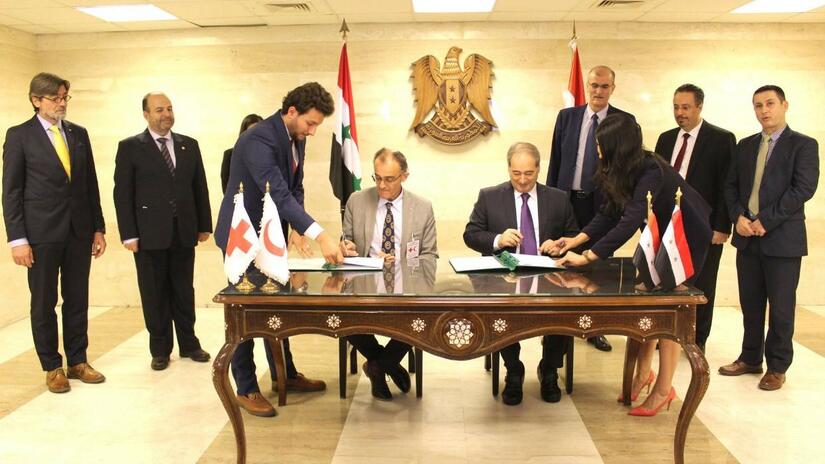 They were perhaps two thousand stranded Syria returnees. Women, children and men sheltering from the unbearable heat and sun, on hill tops, under the scattered olive trees offering no shadow, carrying half empty jerrycans with water and waving at cars asking for help.

This is not a scene from a Hollywood movie.

This is at the No-Man’s-Land zone between the Syrian Lebanese borders; a stretch of a few kilometres in which people are stuck in the COVID-19 politics or the legal meanders of return.  As if the 9 years of an unrelenting conflict, homelessness, and agony in all forms were not enough.  Regardless of root causes as to what got people here, it encapsulates the cruelty of war and the pandemic.

A few days ago, I traveled to Syria from Lebanon by land, crossing a border closed for citizens but open for humanitarian organizations including the Red Cross and Red Crescent personnel.  I saw the same people in the same place under the scorching sun several days later on my way back after visiting Damascus.  Some have had their legal entry sorted out. Others are still out there sleeping under the open sky. As I write, my colleagues in Syria are looking for ways to assist those that may still be stranded.

Syrians are now hit by another wave of suffering: economic collapse, sanctions, hyperinflation, rising unemployment, businesses that barely survived the conflict are now shutting down, more hunger with families skipping meals, and shortages of medicine.

The devaluation of the local currency, the constraints and the blockage of international transfer of money are driving Syrians to extreme poverty.  Syrian sons and daughters living abroad are experiencing serious challenges to send the 100 or 200 dollars, to parents who are still living in Syria.  The impact is catastrophic.

Concretely, what does this mean?

It means, your 70-year-old mother, will no longer have a decent meal because she can’t afford it. It means, your 80-year-old father is no longer able to buy the asthma medication he needs for his survival. It means that daughters and sons, naturally tending to their elderly parents needs as part of a safety net that functioned well for centuries, are no longer able to meet their deeply rooted duties. It means that even emotionally and psychologically, Syrians are affected to the very core of their identity and dignity.

My message is not a political one, it is purely humanitarian. We at the Red Cross and Red Crescent have a neutral stance about the sanctions. We work as humanitarians to make sure that people are not suffering and dying because of lack of basic needs such as medicines, food or water.  Innocent people in Syria are paying the price of failed diplomacy, and unnecessarily suffer daily.

During my visit, I heard a common and sad “joke.” Many Syrians told me: Either we die of hunger, of war, or we die of COVID-19. It doesn’t matter.”

In between the conversations, people asked: Can you send us coffee? Can you send us Tabasco sauce? These things don’t make it to Syria anymore. One might think these items are luxuries.  Well, we believe that preserving human dignity matters.

In Damascus, I met the dedicated leadership of the Syria Arab Red Crescent (SARC) the volunteers and the staff who joined SARC to help their people. COVID-19 didn’t stop them. The message “Stay Home” does not mean much to them because their job is to be with their communities, in the streets, in the ambulances, in the camps for refugees and the internally displaced.

I also visited the SARC Damascus branch; A nine-story building where each floor has a specific function. I started with the Emergency Response Teams on the ninth floor. I met young women team leaders and their volunteer teams who run the emergency calls and the ambulance dispatch. I asked them what was their number one concern?  They said the lack of Personal Protective Equipment (PPEs).  They must rationalize the PPEs and reuse them between the different teams. They send the PPEs to sterilization in between missions and sometimes, as a new emergency call kicks in, the PPEs are not sterilized yet. So, some take the risk of wearing utilized PPEs.  Some can’t take the risk as they have children and families at home. With some 11,000 SARC volunteers at work across the country our current PPE supplies and resources are being exhausted at high speed.

I visited the physical rehabilitation and prostheses center. I saw young children, young woman and men trying to make prosthesis fit. They have been disabled by the war and trying to bounce back. Some smiled to me, some didn’t, and some cried in silence.

I visited another floor that hosts the dialyses unit. I met with the young doctors who are running between the fully packed beds with dialysis patients.  They talked about the lack of spare parts, lack of filters for the dialysis machine, the maintenance needed, the inability of the patients to access the facility because of the conflict.  I was left wondering how many have died lacking access to such lifesaving units?

Another floor was being converted to provide ICU capacity as the anticipated COVID-19 waves begin to hit.

I salute SARC, its dedicated volunteers, its managers, its doctors, its nurses, and its leaders who are doing their very best to deliver humanitarian aid in one of the most complex crisis that I have ever experienced in my 32 years of humanitarian work.

I walked out of the SARC headquarters and paused at the main doors next to a wall displaying the names of the 62 staff and volunteers who lost their lives in line of duty to save others.  Thank you!  I also managed to meet Syrian officials to discuss and agree on increased access, with UN and ICRC colleagues to better coordinate and expand the work.

Serious international diplomacy efforts are needed to halt the suffering and address the challenges that Syrians face every single day including but not limited to COVID-19.  Increased humanitarian funding and ceasefires will allow us more access, save more lives, and simply offer more protection to people.

We, as humanitarians we will continue doing our part to alleviate the suffering; It will not be enough.

An urgent, just, and durable political solution is needed.