A volunteer on wheels in the fight against the pandemic 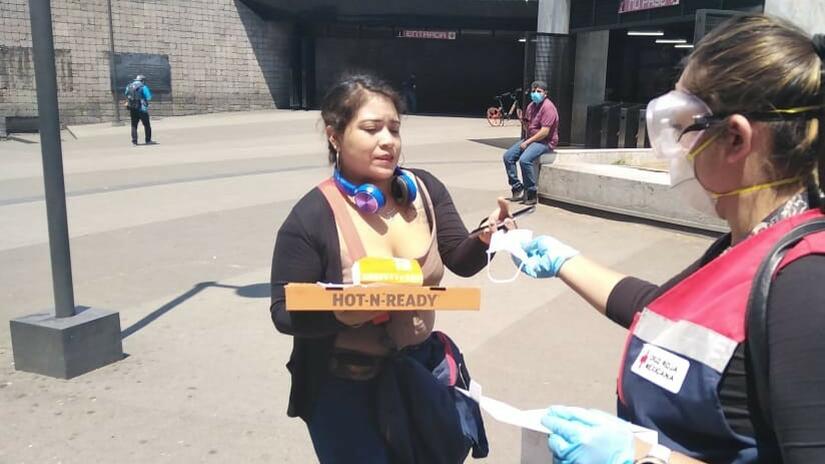 Gina Mejia is 27 years old, an architect by profession, and has been a volunteer with the Mexican Red Cross for three years in Mexico City, the country's capital, a city with a population of nearly nine million.

According to Gina, she has always felt the impulse to support those who need it most: "I have always had the spark to help and on many occasions, when I was working as an architect on construction sites, I thought: if I have an accident, I really wouldn't know how to act to help the injured person". And that is how she decided to join the Red Cross and started first aid training. She has even given courses in her company and always makes her colleagues and friends aware of the importance of first aid. Later, she joined "Volunteers on Wheels", a solidarity programme that she carries out together with other 20 volunteer colleagues, travelling all over the city by motorbike. "I have my own bike and the programme consists of going around different areas of the city, together with other volunteers, to support the people who need it most. For example, we distribute bread and coffee in the hospitals and slums, or we distribute toys to children from poor families.

With the arrival of the COVID-19 pandemic, everything changed, including the "Volunteers on Wheels" programme in which Gina participates: "At the Red Cross, we quickly identified the need to provide information and protective measures to the population, especially to people with few resources who spend a lot of time on the street, such as street food vendors". And so she and her colleagues began to ride their motorcycles around the city, this time to take the temperature in the markets, distribute masks (or "mouth covers" as they say in Mexico) and hydroalcoholic gels, as well as offer truthful information and advice on how to protect themselves against the virus.

Initially, many people didn't wear masks because they didn't really know how important it was to protect themselves against the pandemic. According to Gina: "We realized that a lot of awareness raising was needed to explain to people the importance of protecting themselves against COVID-19 and to offer protective measures. The Mexican Red Cross is a reference organization in the country and we noticed that if we were the ones who advised them to wear a mask or respect distances, they would listen to us," she says proudly.

The volunteers of the Mexican Red Cross protect themselves with all the protective measures they need to carry out their work safely. And they know where to go to help those who need it most. In addition to crowded areas such as hospitals and markets, one of the points on her route is the "Glorieta de Insurgentes". There are palapas that offer access to wifi and it is an area where many people with few resources gather, which means a high risk of contagion. Many of these people live on the streets. According to Gina: "It's very nice to see how homeless people come to us to ask for masks and ask us about how to protect themselves against the pandemic. Many of them ask us for more than one, because at the beginning there was a shortage and also they cannot buy them, and they are very grateful when we give them the masks and they can put them on".

"For me, being able to help at this time, even if it seems like a small thing, is very important, and now I know that the work of Red Cross volunteers is crucial in a situation like this," concludes Gina. Now more than ever, she says, it is clear to her that she will stay with the Red Cross forever.