We make the impossible, possible 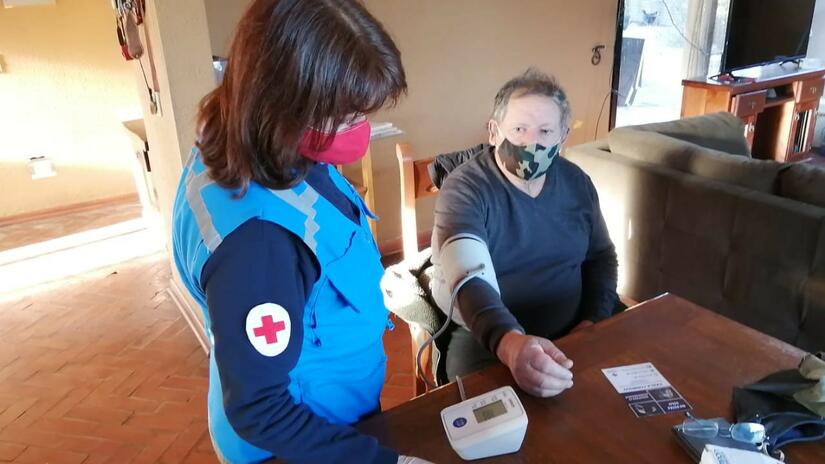 David Brito is studying to be a commercial engineer in Chile and in the meantime he is thinking about how to help most affected people by COVID-19 in his country. And he comes up with some good ideas. His mother was already a volunteer with the Chilean Red Cross for the extinction of forest fires, when her 23-year-old son joined the O'Higgins Regional Committee three years ago, where he works and develops his creativity in the fight against COVID-19.

Since the declaration of the pandemic, David has been thinking about how the Red Cross could help people who were feeling lonely and isolated during the months of confinement. At the same time, many of the organization's senior volunteers were also very frustrated about having to stay home from volunteering. And so, in late March, the Speak to Me project was born. "It all started with the purchase of a SIM card that cost less than 2,000 Chilean pesos (2 euros). With that card and a phone, we were able to make ourselves available to people in confinement who were looking for an emotional distress... At first, we were surprised to find that not only elderly living alone called us, also parents or even young people who were looking to talk to someone who would listen to them and get truthful information about the virus, did it. This service is helping us a lot to fight false rumors that put people's health at risk”. First it was the phone, but such was the acceptance in the community that they quickly set up a WhatsApp line and a Facebook account so they could reach more people.

Several senior volunteers in their 70s and 80s answer the calls, while younger ones take care of Facebook and WhatsApp line. According to David: "I thought the project was an excellent idea to offer a double service of psychosocial support: on one hand, senior volunteers who could not leave their homes due to the confinement restrictions, now can work from their homes without over-exposure themselves to the virus, and on the other hand, many people in need are receiving support during these difficult times. The team of 7 volunteers who answer the calls have psychosocial training, and to attend most difficult cases they receive counseling from a psychologist. "I must admit that it was not easy to start”, continues David, "because everyone thought it was very complicated to do it right, but now we have become so famous that we also get calls from other countries. I remember one day when the phone rang at four in the morning... it was an old lady from Spain, Doña Concepción, who was very lonely and needed support. We referred the case to the Spanish Red Cross so they could take care of her from there.

They also receive calls from people who have detected that a neighbor is very lonely and needs company, or food, hygiene items, or even medicine. One of the saddest cases was a call that came in about 32 migrant families from different Latin American countries who were living in confinement, crowded together in a tiny space, in terrible conditions.  "It was gratifying to be able to help them, especially the children, who were really in need…  the best payment is a sincere smile from someone who says thank you”.

According to David, "we adapt to any situation no matter how difficult it is, the will of the whole team made the project moving forward because we are not going to give up on our fight against coronavirus. Our motto is: we make the imposible, possible," he ends.

The Chilean Red Cross in response to the pandemic has provided more than 49,000 services in polyclinic activities, support to vaccination campaigns, delivery of humanitarian aid to migrants and vulnerable communities, distribution of PPE, food distribution, psychosocial support, etc. In addition, it has disseminated information and prevention measures and has made home visits to people with mobility difficulties and the elderly.
COVID-19
Americas Chile
Chilean Red Cross