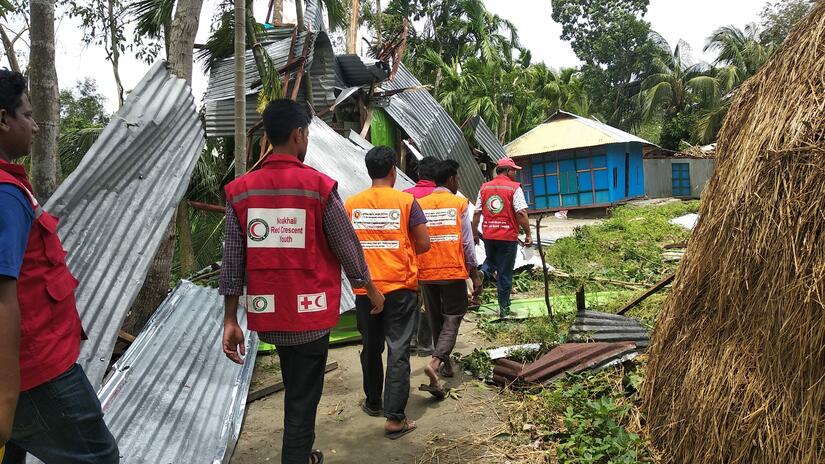 When a National Red Cross or Red Crescent Society receives a forecast of an imminent extreme weather event, one of their most urgent tasks is to decide what action to take in anticipation of a possible disaster.

In the case of the Bangladesh Red Crescent Society, this decision-making process has become clearer and more straightforward, thanks to its improved use of scientific information, as was shown in recent weeks before the arrival of Cyclone Fani.

Since 2015, the Bangladesh Red Crescent has been using a Forecast-based Financing (FbF) approach with support from the German Red Cross. As a result, when Cyclone Fani approached, decision-makers could rely on an established system which provided them with robust forecast information and served as a basis to decide, when and where to act and with what resources.

The Bangladesh National Society, with support from the German Red Cross and the Red Cross and Red Crescent Climate Centre, had developed an Early Action Protocol for cyclones. This plan clearly defines forecast thresholds and details which early actions are needed, and where, to protect the population.

In the days before Cyclone Fani made landfall, the Bangladesh Red Crescent set up an Activation Committee in line with its established procedures for activating the Early Action Protocol. Its role was to continuously review the meteorological data and decide if according to the forecast information the trigger for activation was met. The Activation Committee is chaired by the Deputy Secretary General of the Bangladesh Red Crescent and also includes experts from the Cyclone Preparedness Programme, the Climate Centre, German Red Cross, and IFRC. Activation of the Bangladesh EAP is being funded by the IFRC’s financial mechanism to support early action, the Forecast based Action by the DREF, which was created in May 2018.

Based on the forecast information, the local branches in the coastal districts activated their control rooms, mobilized their resources, volunteers and officials for early warning and preparation of evacuation shelters. Eight members of the National Disaster Response Team were deployed in four districts (Satkhira, Khulna, Bagerhat and Barguna) to support the activities being conducted.  In two districts, local branches with German Red Cross support also undertook a rapid stock-taking of local markets to ascertain if they were able to supply the food and relief items that would be required in case of an activation.

In addition, a database of the cyclone shelters, markets and accessibility was used by all stakeholders in preparation for Cyclone Fani. The database had been developed by the FbF project and proved to be very useful in preparing districts in the cyclone’s path for evacuation, and in obtaining real-time information from the shelters through the contacts listed.

The Activation Committee met several times before deciding not to activate the Early Action Protocol, as the forecasts did not meet the trigger that had been defined in the EAP and all the data and analysis suggested that the forecasted impact could be managed with resources from the local branch. Had the Committee decided for activation, the EAP Implementation Committee was there to coordinate and implement the EAP and districts were ready.

Thanks to the work on FbF, there was a clear framework for decision-making and the systematic monitoring of forecasts allowed the preparations to focus on those districts that were later affected by rains, using resources efficiently.

All these actions as well as the structures for coordination demonstrate the importance of forecast-based financing in supporting readiness activities and bringing all affected parties together to take anticipatory action.