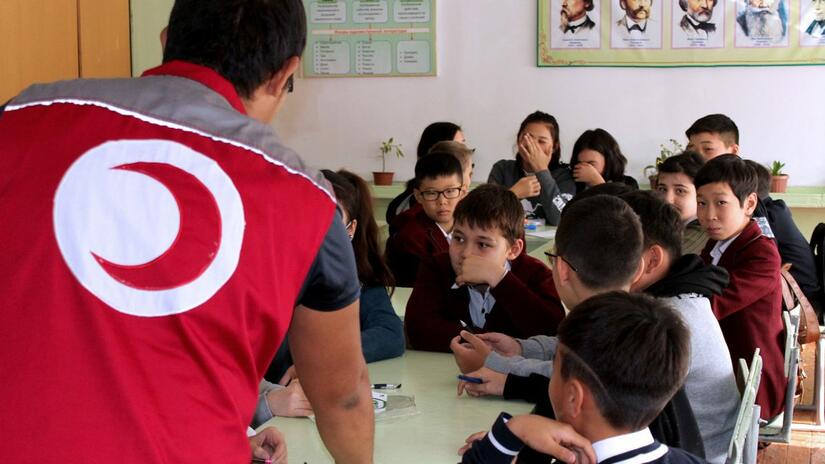 The imperial family, the Japanese government, the Japanese Red Cross and the Japanese people revere the memory of Her Majesty Empress Shôken, and their enduring regard for the Fund is evident in the regularity of their contributions to it.

The grants are usually announced every year on 11 April, the anniversary of her death. This year the announcement is being published earlier due to the weekend.

The Fund received 47 applications in 2019, covering a diverse range of humanitarian projects run by National Societies in every region of the world. This year the Joint Commission agreed to allocate a total of 395,782 CHF to 14 projects in Bolivia, Cyprus, Guinea-Bissau, Iraq, Lebanon, Mexico, Mozambique, Sao Tome and Principe, Singapore, Slovenia, Suriname, Thailand, Ukraine and Vanuatu.

The projects to be supported in 2019 cover a number of themes, including displaced people, disaster preparedness in vulnerable communities, and social cohesion and inclusion. Moreover, nearly all of the selected projects seek to strengthen the volunteer base of National Societies, with a view to building on the unique role played by the International Red Cross and Red Crescent Movement in communities everywhere.

Going forward, the Joint Commission will continue to focus on innovative projects that are geared towards learning so that the broader Movement can benefit from project findings.

The Bolivian Red Cross is currently working to address the issue of gender-based violence among young people. It will use the grant to set up a permanent programme for schools and youth organizations in order to conduct educational sessions, raise awareness, and provide support and assistance to victims of violence.

Cyprus has become an important destination for trans-Mediterranean migration. Using the grant, the Cyprus Red Cross Society will train refugees and asylum seekers in standard and psychological first aid to enable members of the migrant community to help each other and relieve some of the pressure on the health-care sector.

The Red Cross Society of Guinea-Bissau will use the grant to strengthen the resilience of coastal communities threatened by extreme weather. The funds will go towards drawing up an emergency action plan, building up stocks of relief items and training at-risk communities so that they can respond rapidly in times of need.

In Iraq, displaced people and those living in remote areas have limited access to water, sanitary facilities and health care, which increases the risk that diseases such as cholera will spread. The Iraqi Red Crescent Society will use the grant to set up a health-education programme to raise children’s awareness of communicable diseases and the importance of personal hygiene.

The conflict in Syria has significantly increased the number of refugees in Lebanon, which has put a strain on blood-related services in the country. The Lebanese Red Cross is a major provider of these services and will use the grant to enhance its ability to deliver them free of charge to all those in need.

Hundreds of schools in Mexico were damaged by a major earthquake in 2017. The grant will help the Mexican Red Cross to set up a programme to prepare school communities for disasters and other emergencies, promote healthy lifestyles and develop skills to facilitate peaceful co-existence.

Young people account for more than 70% of the volunteers of the Mozambique Red Cross. The National Society will therefore use the grant to strengthen its youth-oriented initiatives by running training camps and information campaigns, and setting up Red Cross activities in schools.

In 2004, the Sao Tome and Principe Red Cross opened a social home for the elderly, which plays an important role in reducing this community’s vulnerability. The grant will allow the National Society to renovate the building and improve the services on offer.

The Singapore Red Cross Society runs a large-scale programme to deploy volunteers overseas during disasters. It will use the grant to scale up the training programme for these volunteers, adding more specialized and in-depth training and team-building sessions to ensure the volunteers can work as effectively as possible.

The Slovenian Red Cross plans to take an innovative approach to social cohesion by tackling hate speech and its consequences, with a special emphasis on hate speech against migrants. The grant will go towards a training programme within schools, designed to encourage students to become young cultural ambassadors and further spread the message.

The Suriname Red Cross Society will use the grant to address disaster preparedness in vulnerable schools in Paramaribo. The National Society will help schools and communities to draw up disaster plans, deliver first-aid training to teachers, and set up and train school emergency brigades made up of teachers and students.

The Thai Red Cross Society has a proven track record in conducting water, sanitation and hygiene (WASH) activities in emergencies, through its widespread network of registered nurses. It will use the grant to scale up this campaign, as well as to create a WASH manual, together with general and menstrual hygiene kits.

The armed conflict in Ukraine has led to a substantial rise in the number of volunteers working for the Ukrainian Red Cross Society. The grant will go towards a new, more sophisticated system for registering, managing and training the National Society’s growing volunteer base.

People with disabilities are at greater risk during disasters. The Vanuatu Red Cross Society will therefore use the grant to improve and promote disability and gender inclusion in National Society projects and programmes concerning volunteers, recruitment, capacity building, participation and access.