Syrian refugee gets through challenges with power of writing 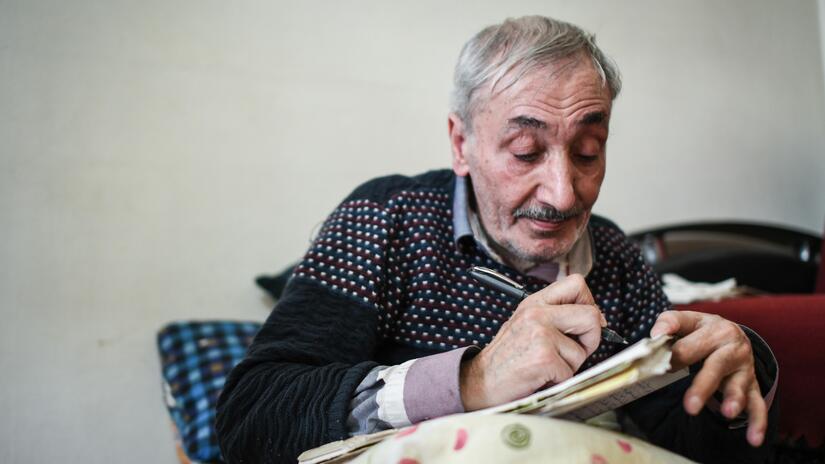 Said loves reading and transforming his personal struggles into stories and poems. Each tells a different story close to his heart about love, loss and the everyday challenges of those forced to flee conflict, like himself.

“How can I be indifferent to the suffering of those people injured by bombardments,” he says.

“I write about humanity and homelessness. About the ones who were displaced just like us. I feel them and I feel their suffering. These are the people of my country – they are my family.”

Said is a 66-year-old Syrian refugee living in Turkey; he and his family were forced to flee their hometown in Syria’s southwestern area of East Ghouta in 2018.

Said remembers a beautiful life before the war, full of nature and books. Working as a farmer since he was 12, he was growing vegetables and raising livestock. Inside his house, he had a large library, filled with precious manuscripts and books from well-known philosophers.

When a rocket landed on their home in Eastern Ghouta, the whole library was engulfed in flames.

“The fire devoured everything, blew up everything. With all the past, with all the books it had, with all the documents there. It was my legacy and the legacy of my ancestors. And all were gone,” remembers Said.

When the rocket attack tore through his home, he remained under the rubbles with his three-months-old grandchild Jana and shrapnel from the rocket severely injured him and paralyzed almost one side of his body. With barely any time to recover, they were forced out of their village and crossed into Turkey.

Said’s wounds are still fresh. However, writing, reading and time with his little grandchildren help him hold on to hopes of a new life.

“I sit with my grandchildren, they are always with me. We play games together and I tell them stories. I think I am child-like to them,” Said says with a smile.

Starting over in a foreign country with a physical disability was not easy. Now, Said receives small cash assistance each month from the Turkish Red Crescent and IFRC, with funding from the European Union. Due to many health problems he and his family have, they use most of the cash assistance to buy medicine.

Funded by the European Union and its Member States under the Facility for Refugees in Turkey, the Emergency Social Safety Net (ESSN) provides monthly cash assistance via debit cards to nearly 1.8 million of the most vulnerable refugees in Turkey. The cash assistance enables them to decide for themselves how to cover essential needs like rent, transport, bills, food, and medicine.

This article covers humanitarian aid activities implemented with the financial assistance of the European Union. The views expressed herein should not be taken, in any way, to reflect the official opinion of the European Union, and the European Commission is not responsible for any use that may be made of the information it contains.
ESSN
Turkey
IFRC Turkish Red Crescent