Weaving a new life together in Turkey 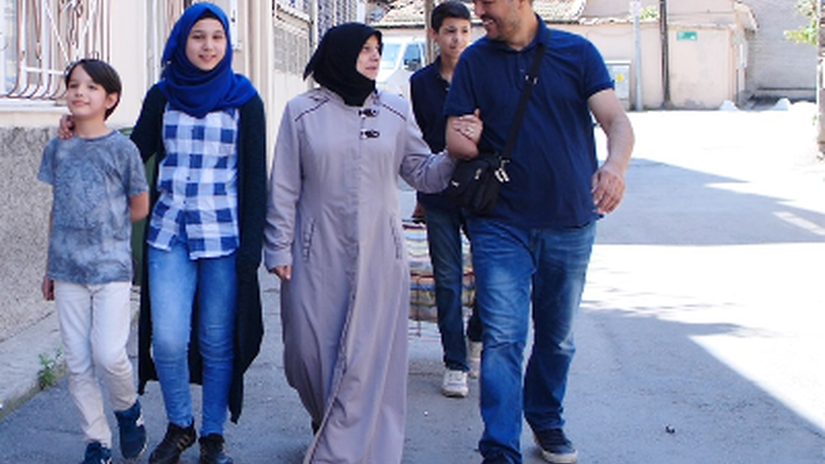 Textiles from Syria - a rich blend of blues, yellows, reds, and creams - have long been treasured by families, merchants, and travelers since the era of the Silk Road. But nine years into the country’s conflict, most textile factories have been destroyed, and its artists have been displaced.

Bassam Wais operated a textile factory in Aleppo until the destructive effects of war became unbearable for him and his family. They left their home with the few things they could carry and started from scratch in Turkey’s own textile hub Bursa more than five years ago.
(Photos: Turkish Red Crescent)

Adjusting to a different culture, finding their way in a different city and learning a totally new language was not easy. But monthly cash assistance received from the Turkish Red Crescent has given the family what they needed to better integrate into Turkey’s society and begin a new life.

Without the worry of paying rent, Bassem had time to learn Turkish, taking courses offered by the Turkish Red Crescent. Bringing his artisan skills to Aleppo’s textile scene, Bassam landed a job in a factory and quickly climbed into a senior-level position in a couple of years. He is now responsible for more than 200 machines.

Bassem’s ambition has inspired his son, Ömer, who gained work experience at a mechanic shop, using his ability to speak both Turkish and Arabic to expand their customer base, including more Arabic-speaking customers.

Small investments in families like Bassem’s reap many rewards. By supporting their basic needs at a critical time, they have been able to contribute to their communities as artists, entrepreneurs, and consumers. Much like the beautiful textiles of Syria, Bassem’s family have been able to weave together and enrich their own “colours” into society.

Funded by the European Union’s Civil Protection and Humanitarian Aid Operations (ECHO), IFRC and Turkish Red Crescent are providing monthly cash assistance via debit cards to the most vulnerable refugees in Turkey under the Emergency Social Safety Net (ESSN) programme. This is the largest humanitarian programme in the history of the EU and the largest programme ever implemented by the IFRC.

ESSN is providing cash to the most vulnerable refugee families living in Turkey. Every month, they receive 120 Turkish Lira (18 euros), enabling them to decide for themselves how to cover essential needs like rent, transport, bills, food, and medicine.

*This story was originally published on Turkish Red Crescent’s kizilaykart.org website and adapted by the IFRC.

This article covers humanitarian aid activities implemented with the financial assistance of the European Union. The views expressed herein should not be taken, in any way, to reflect the official opinion of the European Union, and the European Commission is not responsible for any use that may be made of the information it contains.