Genoa bridge collapse: one year on 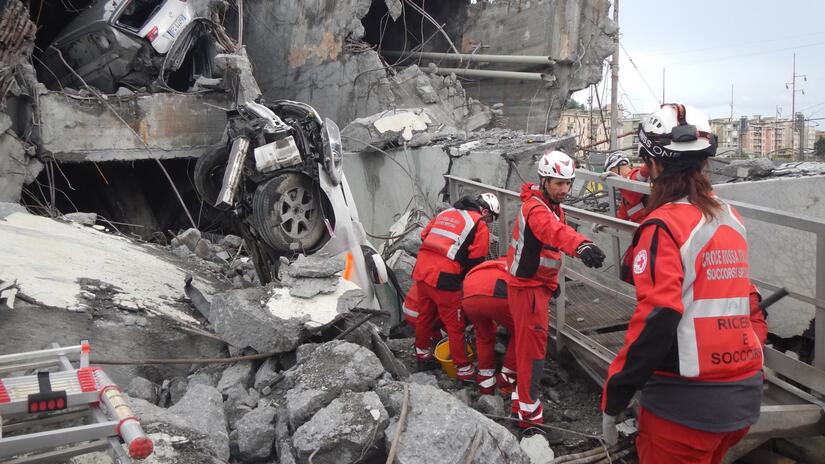 This time last year Paola Vicini was keeping vigil at the base of the collapsed Ponte Morandi in Genoa, anxiously waiting for any news of her missing son, Mirko. For five long days, she did not budge from the site, sleeping in a campervan provided by the Italian Red Cross, and being supported by its volunteers.

“Mirko was working at a company close to the bridge. As soon as I heard about the disaster, I rushed to the red zone. Even though I knew it was impossible for him to survive under that debris, I did not give up hope,” she remembers.

During those days of uncertainty and anguish, Paola was supported by Federica, an Italian Red Cross volunteer, and the two of them formed a strong bond. Federica was holding Paola’s hand when Mirko’s body was retrieved from under the ruins.

“I don’t remember much from those days, but I can still recall Federica’s smile. She was my fortress.”

On 14 August 2018, a 200-metre section of the four-lane bridge in Genoa, Italy, collapsed. Vehicles plunged 90 metres onto railway tracks, and buildings below, killing 43 people and injuring 29. 600 people have been displaced.

Together with the military and state authorities, Italian Red Cross search and rescue teams searched for survivors for 26 hours. Two Red Cross nurses helped identify bodies at the Genoa morgue, while 15 other volunteers provided psychosocial support to the families of the victims. Altogether 500 Italian Red Cross volunteers took part in the operation that lasted for 35 days.

Antonio Cecala was another who was helped by the Red Cross volunteers.

“My brother and his family had left for a holiday. When I heard the news about the accident, I tried to call him, but he wouldn’t answer his phone. I got anxious and started making calls to the police and the local hospitals, but nobody had any information. So, I decided to go to Genoa to find out what happened to them,” remembers Antonio.

Amid the chaos, he found support and comfort among the Red Cross volunteers who helped him in the search for his missing relatives. Days later his brother’s car was found under the ruins.

Antonio was so moved by the work of the volunteers that he decided to become one of them. “Since the Red Cross gave me so much, I wanted to give something back to those in need,” he explains.

A video tribute to the rescuers and volunteers, “Ponte Morandi: a year on” can be viewed here.
Italy
Italian Red Cross