Iryna from north east Ukraine sits in a Slovak Red Cross assistance point close to the border with Ukraine in late March 2022. She speaks to an IFRC delegate about her journey and how her life has been turned upside down by the conflict in her home country.

Since the start of the conflict in Ukraine, more than 5 million people have fled to other countries, and another 6 million are estimated to be internally displaced. It has exposed people to extremely distressing situations. Many have lost loved ones, their homes, their jobs, and others have witnessed traumatic events.

According to the WHO, one in five people are affected by mental health disorders in post-conflict settings. If left without treatment and adequate support, people from Ukraine face long-lasting effects that could harm themselves, their families and communities.

As a Ukrainian herself who had to leave the country when the escalation began, she understands firsthand the stress faced by those fleeing conflict. “People are craving for someone to take the time to sit alongside them in their pain, but this often lacking for many fleeing Ukraine right now.”

In a regional initiative to meet this massive need, National Red Cross Societies in the Czech Republic, Hungary, Poland, Romania and Slovakia and Ukraine have joined forces to offer mental health and psychosocial support services to more than 300,000 people from Ukraine. Funded by the European Union and with technical assistance from the IFRC and the IFRC Psychosocial Centre, the project connects vulnerable people with mental health professionals and volunteers from the six National Societies.

Support is offered in Ukrainian and other languages through various platforms, including helplines, mobile outreach and in-person group activities. Materials on psychosocial support in several languages are also going to be distributed among mental health professionals and the public. 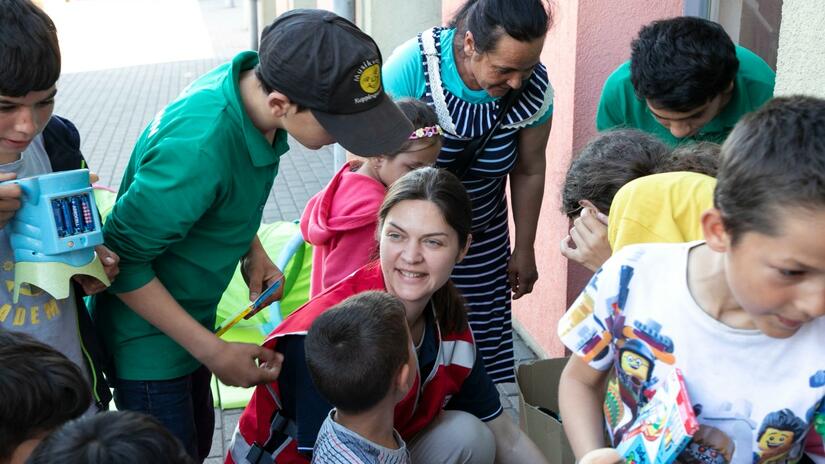 Nataliia, a Ukrainian mental health and psychosocial support delegate with the IFRC, helps children fleeing conflict in Ukraine to collect toys and other supplies at an assistance point across the border in Hungary.

Since the first days of the conflict, Red Cross Red Crescent staff and volunteers have been assisting people at border crossing points, train stations and temporary shelters – listening and demonstrating empathy, sharing life-saving information, and taking care of vulnerable people.

Aneta Trgachevska, acting Head of Health and Care at IFRC Europe, said: “We try to reach everyone in need in a convenient, personalized way. Assistance will not be limited to just a couple of calls or meetings—a person will receive support as long as we are needed. This kind of early response can alleviate symptoms and prevent people from developing serious levels of distress or even mental health conditions.”

The content of this article is the sole responsibility of IFRC and does not necessarily reflect the views of the European Union.

Due to the conflict escalation in Ukraine, millions of people have left their homes and crossed into neighbouring countries. The Ukrainian Red Cross is helping people affected by the conflict as the security situation allows. National Societies in surrounding countries, with support from the IFRC, are assisting people who have left Ukraine with shelter, basic aid items, cash assistance, medical supplies and treatment. People from Ukraine will need long-term, ongoing support. Our priority is addressing the humanitarian needs of all people affected by the conflict, inside and outside Ukraine.