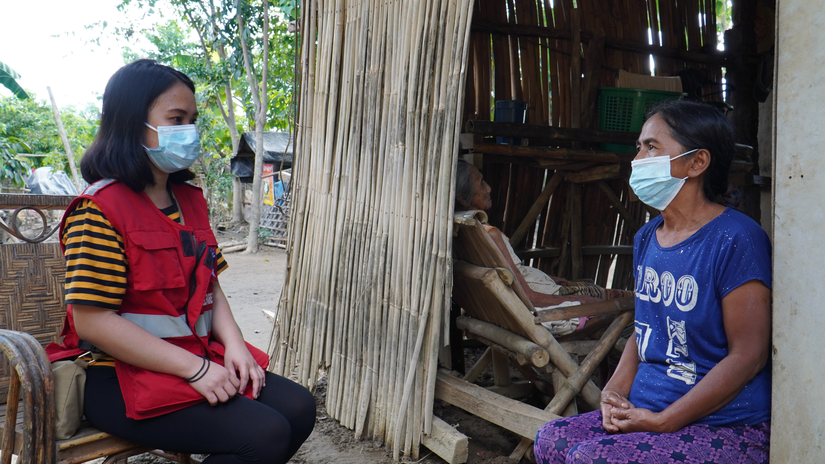 Rebuilding your home, reestablishing income source, or feeding families are all the basic right of people. But those in the Philippines, devastated by typhoons Goni and Vamco are now facing incredible life changing decisions.

They have to now prioritize one basic need over the other as they start to rebuild their lives in the wake of back-to-back super typhoons.

Jesus and Jocelyn Onsay with their grandchild.

For Jesus and Jocelyn Onsay, rebuilding their damaged home and providing a roof for their five grandchildren is a priority. However, they can’t buy any materials to start the repairs because their crops, their only source of income, were destroyed by the storms. With their crops destroyed, even providing food for the family is a challenge, and the food relief currently available is not enough.

Jesus Onsay blows air to start a fire and boil water. His grandchildren share a pack of instant noodles from the food relief for breakfast.

“It’s really difficult. We can’t do anything but rebuild our house. We can’t go to work because we need to repair our house first so the children will have roof above their heads. It pains me to see them get wet by the rain,” Jesus said.

Jocelyn checks their belongings covered by a tarpaulin that was provided by Red Cross after Typhoon Mina in 2007. Their home’s roof was completely ripped off by Typhoon Goni’s powerful winds. Typhoon Vamco compounded their suffering, dumping rains that drenched possessions and inundated their house.

Ceferino and Celeste stand in front of their ruined home. Tarpaulins serve as a temporary roof and walls to protect them from the rain and heat of the sun.

Ceferino, 67, and Celeste, 65, have tried to make their destroyed house habitable again using a tarpaulin provided by the Philippine Red Cross and nails and pieces of wood salvaged from the ruins of their home.

Ceferino earns a living as a part time construction laborer but with his age, finding a job has proven not to be that easy.

Ceferino is trying to rebuild using whatever is left of his devastated home.

“Only few people hire me because of my age. I am trying my best to repair our house to make it livable without enough materials because I have no money,” Ceferino explained.

Christopher has to make the difficult decision of cleaning and repairing his house first but that means losing his source of income.

“That’s the problem, instead of attending to our livelihood, we have to fix our house first, so we have a shelter. Our income comes from harvesting copra (dried coconut kernel) and abaca. Our abaca is already rotting (up in the mountain). This is life. We have to accept it,” Christopher said.

Abaca crops – an important source of income for many families, were destroyed by typhoons Goni and Vamco.

The typhoons have also devastated fishing communities, like in Bato, Catanduanes.

Alvin Navarro left home to try and save his family’s water buffalo from floods but when he returned home the water had already reached the second floor, leaving him no time to save their belongings.

Food for his two children and wife is Alvin’s priority. He is at a loss on how to recover from all the devastation brought by the massive flooding to their home and farm. He was able to save the water buffaloes, but said he will need support to replant his crops and rebuild the farm.

Typhoons Goni and Vamco have destroyed crops that are crucial for food supplies and income, including these corn fields in Amulung, Cagayan.

Elma Navarro, her two children and 97-year-old mother survived the massive flood caused by Typhoon Vamco by staying on the roof for hours.

Elma Navarro’s house was seriously damaged by the flood brought by typhoon Vamco. With the help of relatives, they managed to repair the house, but Elma has doubts if it could withstand another major disaster. As a single mum, Elma’s focus is now to look for work and an income that can help her rebuild a safer home while supporting her three children and 97-year-old mother.

“This is the worst flood I have experienced since Typhoon Mangkhut in 2017. I wash clothes to earn money to support my family and without an additional source of income, I don’t think I will be able to rebuild our house,” Elma said.

The livelihoods of over 200,000 farmers and fishermen are affected.

The International Federation of Red Cross and Red Crescent Societies has released 1.15 million Swiss francs from the Disaster Relief Emergency Fund to provide immediate and urgent needs of affected communities. More support is needed to help people get back on their feet.